The Weeknd dropped his fifth studio album, “Dawn FM,” at midnight ET on Friday and it features a handful of collaborations — including with comedian Jim Carrey.

His DJ character is in line with the broader theme of the album, which seems to follow a persona of the Weeknd’s through the final chapter of his life. In promotional material for the new release, which comes after the 2020 megahit “After Hours,” the Weeknd — whose real name is Abel Tesfaye — is seen in makeup to make him appear much older. Carrey is even listed as a songwriter on the final track. 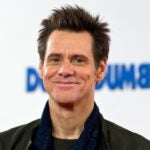 In “Phantom Regret by Jim,” Carrey delivers a poem that begins, “You’re tuned to Dawn FM, the middle of nowhere on your dial, so sit back and unpack. You may be here a while. Now that all future plans have been postponed and it’s time to look back on the things you thought you owned, do you remember them well? Were you high or just stoned? And how many grudges did you take to your grave? When you weren’t liked or followed, how did you behave? Was it often a dissonant chord you were strumming? Were you ever in tune with the song life was humming?”

Carrey expressed his excitement about the album on social media.

“I listened to Dawn FM with my good friend Abel @theweeknd last night. It was deep and elegant and it danced me around the room. I’m thrilled to play a part in his symphony,” tweeted Carrey, who has been known to step outside of the comedy realm in the past, notably creating viral political cartoons.