In his second day on the witness stand, Johnny Depp testified Wednesday that he accepted the nickname Amber Heard gave him — “The Monster” — to “placate” his now ex-wife in an attempt to calm her alleged bullying and attacks.

“In the beginning, she had used a different word to explain the same thing,” he said. “She would use the word ‘demon.’ Demons. That my demons were coming out … I don’t remember exactly how ‘monster’ came out, but that word stuck and it stayed until this day.”

Depp said he, too, adopted the term as a way to keep the peace.

“She had told me many times that the monster was only me when I was using drugs and alcohol,” he said from the Virginia courtroom. “But even when I was stone-cold sober, off of alcohol and all substances aside from my meds … the term ‘monster’ was still there.”

Heard has accused Depp of violent abuse and physical attacks during their marriage, particularly when he was using drugs or alcohol. Depp says Heard was the aggressor in the tumultuous relationship, and denied ever hitting her.

“I’ve never struck Ms. Heard,” he said, when asked about an alleged argument over his “Winona Forever” tattoo (since changed to “Wino Forever”). “I’m certainly not going to strike a woman if she decides to make fun of a tattoo that I have on my body.” 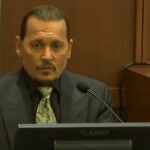 Depp said Heard couldn’t be wrong — and after less than two years of dating she started calling him names and arguing. Depp claimed Heard would “verbally decimate me or send me into a tailspin or depression,” and allegedly attack him by slapping, shoving, throwing remotes at his head and throwing wine in his face. “In her frustration and rage and anger she would strike out.”

Depp said he felt there was no way out of arguments, describing them as “rapid-fire sort of endless parades of insults.” He said he felt like he was in a relationship with his abusive mother and he “wasn’t allowed to be right or allowed to have a voice.”

The arguments often times escalated to violence, Depp said, adding that he would lock himself in a bathroom to get away from the “Aquaman” actress, even going as far as renting an extra hotel room to anticipate needing a place to escape. Removing himself from the situation was a technique he learned as a child when escaping his abusive mother.

Depp also said Heard had her own relationship with drugs and alcohol, and that she was particularly fond of MDMA (aka Ecstasy) and mushrooms. But when he asked her if she’d be willing to try sobriety as a way of supporting his, she declined, telling him, “I don’t have a problem,” he said. 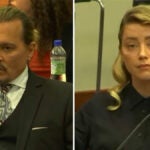 When asked why he stayed in the relationship, Depp said Heard would threaten suicide, recalling when she’d stop him from leaving and say “I can’t live without you, I’m going to die.” Depp told the court it was triggering because his mother attempted suicide after his father left.

Depp says Heard defamed him by claiming in a Washington Post op-ed to be a victim of domestic abuse. Depp is not named in the article but claims it damaged his career, and is seeking $50 million in damages; Heard has counter-sued for $100 million.