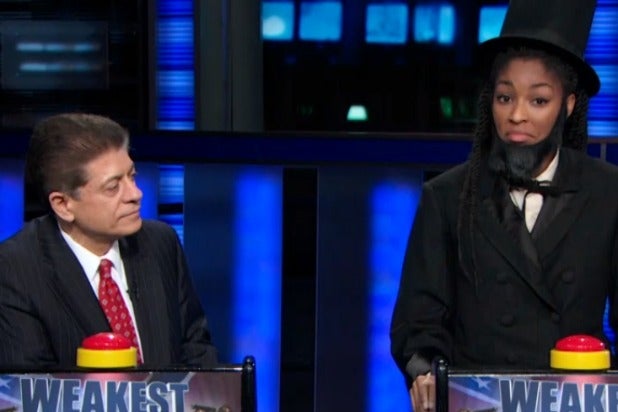 Fox News commentator Andrew Napolitano has what he admits is a contrarian view of the Civil War: He thinks Abraham Lincoln picked a fight with the South in order to speed the end of slavery, sustain the Union, and collect tariffs.

On Tuesday’s “Daily Show,” Jon Stewart enlisted three history professors for a game show, “The Weakest Lincoln,” in which Judge Napolitano faced off with President Lincoln himself (played by Jessica Williams). Stewart started the game by saying that he “loves” Napolitano despite their differences of opinion.

And then the new Civil War began.

The first question was straightforward enough: “Why did Abraham Lincoln start the Civil War?”

Napolitano buzzed in: “Because he wanted to preserve the union, because he needed the tariffs from the Southern states, because he resented the challenge to his authority.”

Abraham Lincoln responded: “Uh, yeah. Well they shot first, and you don’t mess with Lincoln. All the vampires know what I’m talking about.”

He was referring to Confederate troops firing on Fort Sumter on April 12, 1861 — and Lincoln’s well-documented hatred of vampires.

City University of New York distinguished professor Jim Oaks sided with Lincoln, though he agreed he wanted to preserve the union: “They shot first and you don’t mess with Lincoln.”

UMass Amherst professor Manisha Sinha said the tariff wasn’t an issue, because it wasn’t raised until after South Carolina seceded.

Napolitano soon revealed that Stewart had provided the questions in advance, and that the game was rigged.

But hey, it was still informative.