Actor Josh Brolin has gone from landscaping to a career resurgence as a leading actor. And he is a central presence at this year’s Cannes Film Festival. 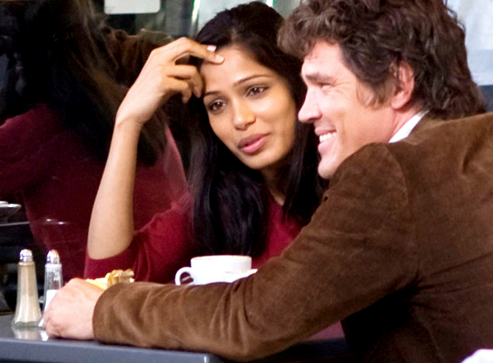 On Friday he cut a villainous figure as a financial bigwig in Oliver Stone’s “Wall Street: Money Never Sleeps.” Then on Saturday he reappeared before the world media at the premiere of Woody Allen’s “You Will Meet a Tall Dark Stranger,” playing Roy, a frustrated writer who lusts after  a luscious neighbor (Freida Pinto, pictured) while married to Naomi Watts.

Brolin has been on his way back to a serious film career since his lawman role in the Coen brothers’ “No Country For Old Men.”

But he made clear on Saturday that he had been finished with the movie business a few years ago, that after a few disappointing experiences (was it “Mod Squad”? Or “Hollow Man”?) he was ready to do something else with his life.

“I got to the point where I felt I was doing films that I didn’t care for so much,” he said at the news conference. “I started landscaping. And I became a day-trader for three and a half years – out of necessity.”

Concidentally, the day-trading ended up being excellent research for the character he plays in “Wall Street 2,” the craven Bretton James. He learned the obsessive nature of trading, and the adrenaline rush of wanting to make more and more money – even though the kids might need to be fed dinner.

The theme of this movie (‘Wall Street’) is more,” he said at the news conference on Friday .”There’s no end to the possibilities of accumulation. Having traded myself, I understand what it is to be that way… to tap into that greed – to lose your identity and reconfigure your identity within that.”

He changed his view of being an actor after the Coen brothers experience.

“I don’t feel that anymore,” he said.  Directors like Joel and Ethan Coen, Stonen, Allen – “these are guys who love to tell stories.”

So it’s likely Brolin will continue hanging out on movie sets for some time. He’s shooting “True Grit,” a high profile remake, and has snagged a role in “Men in Black III.”