A version of this story about Julia Ducournau and “Titane” first appeared in the International issue of TheWrap’s awards magazine.

Sexual congress with an automobile is merely the ignition switch of Julia Ducournau’s graphic, sensory “body horror” thriller, which scored the 38-year-old director an historic Palme d’Or at the Cannes Film Festival this year. She’s only the second woman, and first solo (Jane Campion’s “The Piano” won in a tie in 1993), to be awarded the fest’s highest honor.

In a brave move, “Titane” was selected as the French contender for the Best International Film Oscar. Conventional thinking states that the movie chosen to represent its country is safe and appealing to a mass audience, but “Titane” (French for “titaniaum,” and you’ll see why) is anything but that. Ducournau, whose previous film was the unsettling, bold “Raw,” spoke about her motivations for making this new film and the astonishing prosthetic makeup effects that helped her vision become real.

Is it true that the idea for “Titane” originated in a nightmare?
Yes, I dreamed that I was giving birth to engine pieces. It made me very uneasy and it was a recurring nightmare, which I stopped having the moment I finished the film, by the way. It was about a collision between life and this dead, cold material that doesn’t react. It made me very uneasy. The nightmare was one of the dots I connected between ideas, images, desires, scenes, themes. The core of the film was always about characters finding each other through mutual lies.

How much do you think about the audience and what they might be willing to tolerate?
I don’t like the idea of writing a film just for myself. I don’t think I would go very far if I did that. But, well, it can be crippling if you write a sentence and think, “Oh, no, they’re gonna hate that.” I know what I’m talking about because I experienced writer’s block so bad while writing “Titane.” And this hesitation was one of the causes of that. I think my movie is about love and I don’t see how love is intolerable. But as far as violence is concerned, the worst thing for me would be to feel like I was doing something gratuitous. Some people might say I do that anyway, but I don’t. I know why I’m doing everything in my film, and that’s what helps me set my limits, as far as what I do and don’t show.

Titane displays an extraordinary use of prosthetic makeup effects as the lead character’s body begins to distort and leak motor oil during pregnancy. Can you discuss how that was developed?
You have to be careful of the sheer enjoyment that goes along with prosthetics and fake blood. But what was crucial to me was that it was realistic, even though that’s not a word often linked to my film. I had to make the audience believe the unbelievable. I started by showing my FX supervisor real medical references for what I wanted. And while filming, prosthetics are a very good companion for the actors, especially for non-professionals like [Titane’s leading actress] Agathe Rousselle. It puts them in the shoes of their character right away. They can look and see a wound or a blister or a scratch. 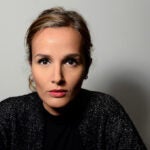 Can you talk more about Agathe Rousselle and her incredible performance?
I always wanted a non-professional actor for that particular part. Especially knowing that Vincent Lindon, who’s a big star in France, was going to play the other lead. I love the idea of mixing those two energies. With Agathe, the first most crucial thing to me that we accept her on screen as the character and not a performer. And the second thing was it had to be someone who had an androgynous look. For that reason, I auditioned both young men and young women for this part.

Really, you did? Was it a long process?
It lasted six months, which is pretty long. The gender was not relevant as long as I found what I needed to fit my film, so I saw a lot of people, because the casting was so open. Agatha has a look that is absolutely transformative, depending on where you put the camera and the angles and the light. Her face is fascinating. And we worked for a year together, hand in hand, in order to build the performance. In terms of the physicality, I warned her about it. I told her it would be very difficult, long hours, fight and dance training, very straining makeup hours in the morning. I warned her about the nudity, which we talked about a lot.

What did you tell her about it?
I gave her the assurance that everything would be safe for her. And if she ever felt uncomfortable about anything, we would simply stop.

Your movie has been the cause of very passionate conversations among audiences. How does that make you feel?
I feel very happy about it. Art exists because it raises questions. That’s what art does to every person who watches a film or looks at a painting or reads a book or listens to music. I hope people question themselves in the light of my film. For me, it would be very sad to look at a painting if it was written on the painting exactly what you’re supposed to think about the painting. That doesn’t make any of us evolve, does it?