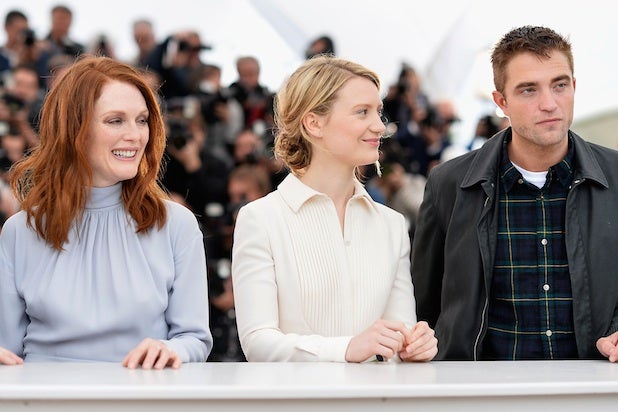 If any aging movie stars or rehabbing teen idols are tempted to be offended when David Cronenberg‘s caustic “Maps to the Stars” moves from the Cannes Film Festival to cinemas everywhere, they shouldn’t be.

That’s the story that Cronenberg, star Julianne Moore and writer Bruce Wagner stuck to during a Monday Cannes press conference for the film. It brings Cronenberg’s typically twisted, spooky and bloody sensibility to a blackly humorous story that is part dark satire, part horror film and part apparent evisceration.

“To see it only as an attack on Hollywood is, I think, shortchanging the movie,” said Cronenberg. “You could set this in Silicon Valley or on Wall Street — anyplace people are desperate and fearful. You could set it anywhere and have the same ring of truth.”

“I love the movie business, I’m not here to disparage it,” added Moore, who corners the market on desperate and fearful in her delicious portrayal of an aging actress hoping to make a comeback by starring in a role originally played by her late mother. “It is all about the desire to be seen.”

(Moore, above, with co-stars Mia Wasikowska and Robert Pattinson in Cannes.)

“As long as there is the need to be seen, this will exist. And it’s not unique to Hollywood or to our time. The Kardashians existed in the time of the pharaohs.”

Of course, we don’t have to put up with blanket coverage of the ancient Kardashians, so modern viewers who see “Maps to the Stars” will more likely associate the bad behavior onscreen with more current names. (Anyone who sees Evan Bird’s portrayal of an out-of-control child star will think of Justin Bieber.)

But it’s all played for laughs — and Cronenberg bristled at the press conference when a reporter suggested that the humor made this film a change of page for the man who directed “The Fly,” “Dead Ringers” and “A History of Violence.”

“I think all my movies are funny,” he said. “This one is no exception. People say to me, ‘You really should make a comedy,’ and I say, ‘I’ve made nothing else.'”

“Maps to the Stars” may not be about Hollywood, but it will play like gangbusters in L.A.