The full trailer for “Jurassic World: Dominion” has arrived, reuniting original cast members Sam Neill, Jeff Golbdlum, and Laura Dern for the first time since Steven Spielberg’s “Jurassic Park.” But for them, it’s just the same old song and dance.

This time around, our dinosaurs aren’t on their own island — they’re roaming through the snow (and indeed the entire planet, following the events of “Jurassic World: Fallen Kingdom”). And apparently, population control hasn’t been a top priority, as we see Owen Grady’s (Chris Pratt) raptors have a young new member of the pack.

As we see the state of things now, we hear a voiceover from the original “Jurassic Park,” of John Hammond (Richard Attenborough) explaining why he reverse engineered dinosaurs in the first place. For now, Grady and his crew seem to be managing the dinosaurs — but Claire (Bryce Dallas Howard) knows that they can’t hide the creatures forever.

You can watch the full trailer in the video above. 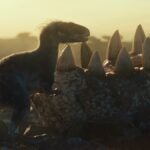 Of course, who better to help with that disaster than the people that were there the first time around. Enter Ellie Sattler (Laura Dern), Alan Grant (Sam Neill) and Ian Malcolm (Jeff Goldblum). Once again Malcolm is there to remind everyone just how dangerous what they’re doing is.

“We not only lack dominion over nature, we’re subordinate to it,” he says, sneaking in a cheeky reference to the film’s title. 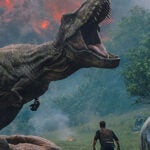 What follows is apparently a whole lot of action sequences, except instead of car chases, we get dinosaur chases — involving cars yes, but also planes and motorcycles.

Colin Trevorrow returns to direct the film, which he also co-wrote with Emily Carmichael. “Jurassic World: Dominion” opens exclusively in theaters on June 10, 2022.