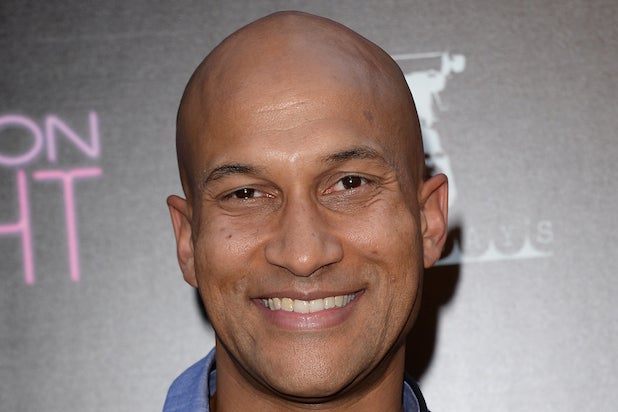 As the writer, executive producer and star of Comedy Central’s popular sketch series “Key & Peele,” Keegan-Michael Key is a busy man. Add in two more TV series, FX’s “Fargo” and USA’s “Playing House” — as well as voice work on “Bob’s Burgers” — and he’s a really busy man. And that’s before even mentioning the movies he’s developing, which include a reboot of the “Police Academy” series and an untitled comedy he’s writing with partner-in-crime Jordan Peele for producer Judd Apatow.

Key grew up in Detroit and met Peele when they competed for an open slot on Fox’s alternative Saturday night sketch series “MADtv,” which ended up hiring both performers. It was “MADtv” where Key and Peele honed their comic chemistry and celebrity impressions, which led to Comedy Central giving the duo their own show.

Over the course of three seasons, “Key & Peele” has established itself as one of the funniest shows on TV, though the Internet has also greatly contributed to its success, as many recurring sketches have become viral sensations including Epic Rap Battles of History (picture Gandhi and MLK dropping the mic), College Bowl (featuring college athletes with crazy names), Valet Guys (featuring pop culture references galore) and Obama’s Anger Translator, which is exactly what it sounds like.

In advance of Friday’s final deadline to submit Emmy ballots, Key carved out a few minutes in his jam-packed schedule to talk to TheWrap about all of the aforementioned projects as well as his dynamic with Peele and how the duo feel about awards.

I’ve always been curious about the creative process between you and Jordan. Is one of you the idea man? Is someone’s strength writing dialogue? How does it work?
I would characterize it that way. I’m what you would call an idea man. Jordan is an idea man as well, but he’s also a prolific and proficient writer. He’s more of a heavy lifter. Jordan is a refinement person who likes to get everything down on paper. We’re like an offensive coordinator and a wide receiver, if you will. I see life through the eyes of an actor and do most of my writing on set. It’s not that I rewrite lines while filming, I’m just rewriting it when I’m in the moment. I let the words explode from me on set. Writers are always pitching things and some they’ve written in a vacuum, but others the room has virtually written, and then one person refines it and writes the dialogue. Jordan is an every-step-of-the-way kind of guy. He has macro ideas and I have micro ideas. I’m always thinking, ‘what are the fun bits we can do between the punctuation, because that’s where we’re going to have a lot of fun.’ I like to wring out every possibility of the script after it is done, but Jordan is a tinkerer of dialogue.

Tell me about the hair and makeup people on your show, because I’m fascinated by how many different looks they come up with for you and Jordan.
Scott Wheeler is the head of the makeup department and Suzy Diaz is his number two. Scott has an Oscar nomination because he created the Borg Queen from “Star Trek: First Contact.” He also worked on the “Garbage Pail Kids” movie. He’d be the first person to say it’s not me [and share the credit], but Scott has never, ever failed to get us the look we wanted, whether it’s a guy with sideburns and Jame Gumb’s hair from “The Silence of the Lambs” or La Chiffre from “Casino Royale.”

Amanda Mofield — who we call Amanda Mofield from Bakersfield — is in charge of our hair, and Jordan and I usually have something in mind. She actually created The Donald, because she worked on “Scrubs” with Donald Faison and wanted to place hair on his head. I’m patently bald, so she’ll just glue hair on my head and then give me a regular haircut, styling my hair after she’s adhered it to my head. The looks have been amazing! If anyone deserves an Emmy on our staff, it’s the hair and makeup department. They’re just unbelievable! I like to hug people or grab their shoulders from behind and startle them and they’re like, “Who the fuck are you?” That’s a testament to Scott and Amanda’s team.

What’s your favorite sketch?
Well, there are two different types of favorites. There’s my favorite to do and there’s my favorite execution-wise, if something came out just the way we wanted to. My favorite is the Bitch sketch, with the two guys hiding from their wives to commiserate with each other. But the most fun are the Valet Guys sketches and the two misogynistic, homophobic, clearly closeted Arab guys. Those two kind of have this ability where the director locks up the cameras and lets us play. There’s more flow to those pieces because the editing isn’t as [invasive].

The College Bowl sketches are hilarious too. Any plans to do another one?
We don’t right now. On College Bowl, we’re trying to do something different with that, something that will surprise the audience. We’ve discussed other sports. Should we do lacrosse where everyone’s name is normal, like Dan Smith, or go really white, like Branch Johansson? Or maybe women’s basketball? We’re still debating. We have another block of shooting from September to December when we’ll be doing another 50-60 sketches, so we’re just letting it stew. We’re interested, but it has to be the right take.

“Fargo” has been the best show on TV lately and it’s been fun watching you and Jordan as Budge and Pepper. Is it nice to just surrender yourself to someone else’s creative process for a change?
It is for me. I don’t want to speak for Jordan, but I think he felt like he was in masterful hands with Noah Hawley. I’m so glad we were chosen to be part of something that’s this new, nascent subgenre, which “Fargo” and “True Detective” fit into. I don’t know if a name has been coined for it — anthology? It’s a miniseries, but not. I’m just so glad I got to be involved in that. Noah wanted to make a 10-hour movie and that’s what he got to do. So a resounding ‘yes’ is the answer for me. I love being an interpretive artist and helping bring someone else’s vision to fruition. Everyone always says stuff like that, but I couldn’t be more sincere. Every moment in that is dialed into Noah’s process.

Be honest, do you guys pay attention to the Emmys and that stuff or is awards recognition just gravy?
It’s more gravy. It does matter to me, because people take their jobs seriously when they’re nominating shows, so there’s a certain amount of scrutiny that would make you appreciate getting a nomination, and especially a win. We’re so ensconced in what we’re doing now though. I mean, we’re in the weeds, so people have to pulls us up from under water and say here’s this other thing and it is worthwhile. Listen, even if it is just gravy, it’s really delicious gravy. There’s no lumps!

You pop up, literally, in Luke Greenfield‘s upcoming Fox comedy “Let’s Be Cops,” so between that film and the success of the “Jump Street” movies, how do you plan to put a fresh spin on the comedic cop genre with the “Police Academy” franchise?
The big thing we’re planning on doing is following one of the rules on “Key & Peele,” which is, what would you do in real life if this was happening? “Police Academy” is funny, but the plot is there to get you to the next joke. We want to update the script, put it into a 2014 framework, keep it grounded and on top of that, make it be something we can understand that’s in the present. There will be things like dash cams, tasers, pepper spray — things that show how a police academy operates today.

Watch the College Bowl 2 video from “Key & Peele” below.