“Totally Killer” follows Shipka’s Jamie, whose mom Pam (Bowen) is terrorized by the resurgence of the Sweet Sixteen Killer — a masked maniac that slaughtered a group of teenage girls in the ‘80s. With the help of her friend Amelia (Kelcey Mawema), she travels back in time to 1987 and teams up with the teen version of her mom (Holt) to try and stop the killer.

“We thought this genre mash-up of slasher/comedy with a twist of time travel was just so fun, and Nahnatchka Khan is perfect to direct,” said Chris McCumber, president of Blumhouse Television.

Jen D’Angelo is penning the screenplay based on an original script by David Matalon and Sasha Perl-Raver. Production begins Thursday in Vancouver. 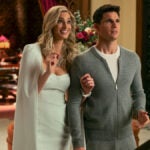 “The idea of a horror-comedy time travel movie is, I’m gonna be honest, something I never thought of in my life,” Khan said. “So when I was approached by the amazing creatives at Blumhouse and Amazon about Totally Killer, it was just so unique and exciting I had to be involved. And then add this incredible cast on top of that? Everybody get readyyyyyyy.”

“Totally Killer” is a continuation of a deal struck between Blumhouse Television and Amazon Prime Video in 2018 for eight thematically connected films. Jason Blum will produce with Adam Hendricks and Greg Gilreath.