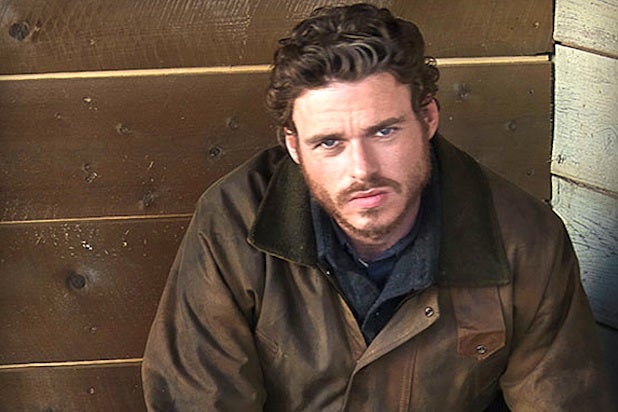 Viewers who watched the premiere of “Klondike,” Discovery’s first scripted miniseries, may have been struck by the big twist in the story Monday for New York City schoolboys-turned-prospectors Bill Haskell (Richard Madden) and Byron Epstein (Augustus Prew).

“I think there’s something bold about the writing of it,” Madden told TheWrap. “You start off thinking you’re watching one show, the characters also think they are going on an adventure. The first thing that happens is an avalanche and these boys realize, ‘So, this isn’t just fun. We could die here.'”

Spoiler Alert: Do not read on if you haven’t watched Monday’s first installment of “Klondike” and don’t want to be spoiled.

After a raucous introduction to the heart of Canada’s Gold Rush in 1897, Dawson City, a mysterious gunman shoots and kills Byron.

“When he gets shot and dies, the whole show changes into a totally different piece,” Scottish actor and “Game of Thrones” alum Madden said. “I really like that you start off with this adventure and all the things that made people want to leave for the Gold Rush and then you discover this new world where you don’t know who you can trust. I think that’s what’s brilliant about this.”

Based on Charlotte Gray’s book “Gold Diggers: Striking It Rich in the Klondike,” the period drama began in 1897 and follows several strangers and their collective fight for survival and wealth during the last great Gold Rush in our history. Produced by Ridley Scott, Madden stars alongside Abbie Cornish, Tim Roth and Sam Shepard.

TheWrap: How does Byron’s death alter the story?
Richard Madden: We actually get deeper into this world and you actually see the changes in Bill. Belinda sees the goodness in him at the start and as the story progresses you see that goodness being pushed to the point of snapping and to him not being good anymore. I think that’s a big thing that Belinda wants to protect. You see in the story between them that she can see him being pushed further and further to that point. You don’t know if or when he’s going to snap and if he’s going to be that person Belinda doesn’t want him to be. You’re going to see all the characters tested by extremes and how they react. And for Bill as a young man going out there, these are things that will define him as a man for the rest of his life.

How would you define the relationship between Bill and Belinda (Cornish)?
From the first time he meets her, he admires her so much. There is a scene in the second part where he talks to her about the first time they met. I think sometimes you meet someone and it’s like destiny. I think the two of them are going to be interconnected, not to spoil what’s going to happen in the story.

There’s a fiery redhead who appears throughout the first part. What can we expect for her?
There’s a female element to her about seeing something good and innocent and wonderful, and then she gets up there and is slapped with a ‘Wake up, man!’ Bill doesn’t have a lot to do with her. She’s connected to other characters, but Bill very much sees how she changes from one thing to another. Her choices define her and the audience gets to see that. And I think it’s the root of this story is seeing these human beings make choices that define them and warp who they are as humans.

The series is based on actual events, but the real Bill’s story gets murky, doesn’t it?
I think that’s very interesting part to the story. We fictionalize this, because we don’t actually know what happens to Bill Haskell after he left the Gold Rush and then he went back to the Klondike, but we don’t know what happened to him later.

Describe the use of CGI and sound stages for some of the more daunting mountain and snow scenes.
No sound stage, no CGI [laughs]. Location for everything. You can’t put extravagant things in those locations. They don’t survive, tents don’t survive. You can’t bring a tent or trailer up there. You couldn’t even bring a car up.

“Klondike” continues with Part 2 on Tuesday at 9/8c on Discovery.

Watch a preview of Part 2 below: