“The Big Sick” and “Little America” writers Kumail Nanjiani and Emily V. Gordon are pairing again to write a feature adaptation of “The Doubtful Guest,” a 1957 illustrated short story by Edward Gorey. “It” director Andy Muschietti is set to direct.

Nanjiani will also star in “The Doubtful Guest,” which was acquired as a feature pitch by Amblin Partners. Muschietti’s newly launched production company with partner Barbara Muschietti, Double Dream, will produce the film.

“The Doubtful Guest” was Gorey’s third book, and its artwork and story continued the late author’s tradition of surrealist and absurd storytelling combined with nonsense writing and verse. And though the illustrated short contains only 14 pages, each with an image and an odd rhyming couplet, the film is being developed as a live-action feature. 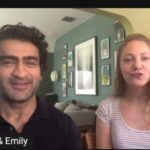 The story of the book is set in a turn-of-the-century manor and follows a mysterious, mischievous creature — in this case, a penguin-like thing — whose unannounced and unwelcome arrival at a family’s home brings trouble and chaos. “The Doubtful Guest” was first published in 1957 and reissued in 1978.

Andy and Barbara Muschietti will produce alongside Dani Bernfeld. Gordon and Nanjiani will executive produce. Jeb Brody and John Buderwitz will oversee for Amblin.

The Edward Gorey Charitable Trust, created in accordance with Gorey’s wishes, is the owner of the artistic literary property in Gorey’s estate. The trustees are Eric D. Sherman and R. Andrew Boose, who will be executive producers on the film.

The Muschiettis are the producers of the “It” films, which have grossed $1.17 billion worldwide. Up next for Double Dream are “The Flash,” which is currently in production in London, followed by “Attack on Titan.” Andy Muschietti will direct both projects.

Kumail Nanjiani and Emily V. Gordon, who are married, were Oscar-nominated for their screenplay “The Big Sick,” which was based on their own life and courtship. They then co-created the Apple TV+ series “Little America.” Nanjiani will next be seen in Chloé Zhao’s “Eternals,” and both he and Gordon created a podcast, “Staying In with Emily and Kumail,” while in quarantine. “Staying In” donated all proceeds to charities helping those affected by COVID-19.