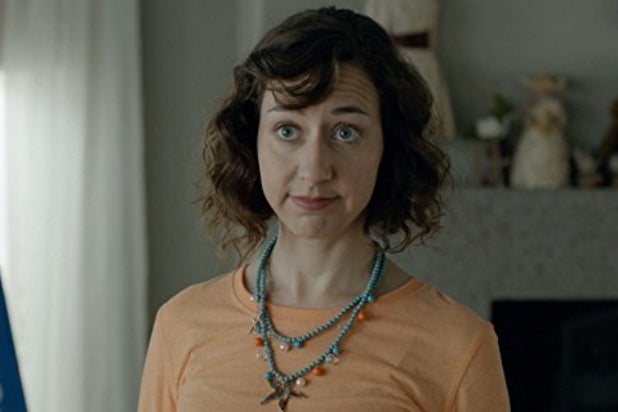 “The Last Man on Earth” may be the funniest new sitcom across all of TV this season, and a big part of that achievement goes to the actress who — up until Episode 3, at least — was believed to be the last woman on Earth.

During our Emmy Contender interview, Kristen Schaal, the former “Flight of the Conchords” and “30 Rock” star told TheWrap something we already knew: Fox’s Will Forte sitcom is “never not funny.”

The woman behind Carol Pilbasian also described their show this way: “There are moments of humanity in there that are really important and special that you don’t always get to see in a comedy,” adding, “You’re sort of double-fisting with humor and humanity.”

We couldn’t have said it better ourselves.

Other topics covered in our Emmy Contender Quickie chat with Schaal include Carol’s famous raisinballs and her short-lived marriage to Forte’s Phil Miller. Read our full Q&A here:

What was the toughest thing you had to do this season?
I had to explain to Phil about … how the raisinballs sort of described whole life. I just got so nervous because we were running out of time and I had to do all this talking and get it out. But I did it, it was fun. I just thought that talking in Carol language about raisinballs was pretty hard, but ultimately satisfying.

What was the most fun thing you got to do this season?
This is so cheesy but just driving to work knowing  I was going to this job was already fun — no matter what the hour.

Episode 3 was really fun. Even being in a wedding dress for 12 hours a day was fine. Getting to do a tiny bit of wish fulfillment with Phil — riding on the steamroller and using the flame-thrower — there are just moments like that where you’re like, “This is my job. This is my job.” It’s so fun.

Let’s assume that somebody has never seen your show. What would you say to persuade them to watch it?
I would tell them that’s it’s a comedy that they’ve definitely never seen before. And that, no matter what, they’re gonna be laughing. The thing that is so wonderful about this show is that it’s never not funny. [It] always delivers, and that’s something to tune in to for sure.

There are moments of humanity in there that are really important and special that you don’t always get to see in a comedy. You’re sort of double-fisting with humor and humanity. Saddle up!

Who else on your show really deserves an Emmy, and why?
Forte, Forte, Forte. It’s definitely Forte — it’s his show.

Everybody’s talented, but definitely Mel Rodriguez. There’s some moments on that show that really caught me off guard. Like, physically when he finds out that Phil is going to kill him, and Melissa (January Jones) knocks on the door and he has potato chips all over his shirt. That moment is so good. That guy is just brimming with so much emotion, and he’s just effortlessly able to convey it. He’s just a great actor — we’re really lucky that we have him.

Are you a binge-watcher, or a once-a-weeker?
I do appointment view. Like “Game of Thrones,” I watched it on the day. You have to, because you can’t look at the Internet otherwise. “Fargo” I also watched it every Tuesday night. “Better Call Saul,” “Mad Men” … a lot of drama.

I really enjoy “Veep” and also “Silicon Valley.” Also, “Nathan for You” — there’s not enough of them, and I already complained to him about that. And “Last Week Tonight With John Oliver.”

If you could add any new category to the Emmys, serious or silly, what would it be?
Because there’s been so much debate about is “Orange Is the New Black” a comedy … “Transparent,” is that a comedy? I think there should just be a new category called “Delightful Shows We Don’t Want to [Categorize].”

If nominated, which episode would you submit and why?
I think I would submit the second episode, just because … it’s just a special one, because (co-creators) Phil (Lord) and Chris (Miller) got to direct it, and that was so fun to work with them. I just recently saw it and I thought it held up. The marriage proposal scene was so important.

One of the hardest things for me to do was when I asked for a divorce in Episode 10, or 9. I might submit that one, because in that one I had to ask for a divorce and be cool with it, then have an electrifying kiss, and then walk out the door! And that’s something that as an actress I’ve never been asked to do or given the privilege to get in there to do, and I’m so happy that they gave me a chance to sink my teeth into something so juicy and special.