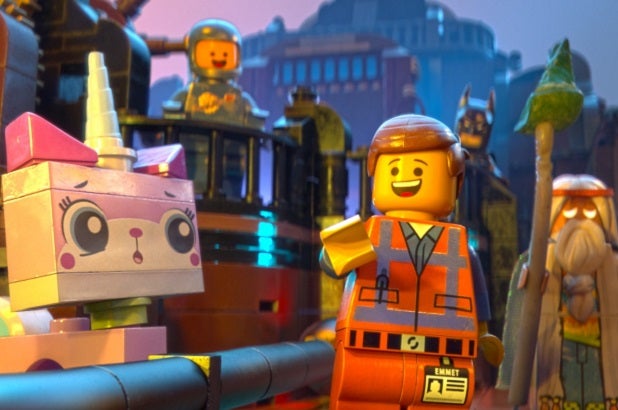 Everything’s still awesome at the box office. “The Lego Movie” was No. 1 for the third straight weekend with $31.4 million.

The animated hit comedy based on the plastic toy building blocks is still in a market-high 3,890 theaters and it dominated, more than doubling the totals of two movies that opened this weekend. The Kevin Costner spy thriller “3 Days to Kill” was second with $12.3 million and the pricey volcano epic “Pompeii” fizzled with $10.1 million for third.

“The Lego Movie” posted the second-best third weekend an animated movie has ever had, behind only “Shrek 2,” which made $37 million back in 2004. That’s on the heels of its $69 million first week, and the $49 million it took over the Presidents Day holiday weekend.

It’s a great way to celebrate for Warner Bros. and producing partner Village Roadshow. On Friday they set May 26, 2017, for a follow-up to their toy-based blockbuster, which has rolled up $183 million domestically since opening on Feb. 7 and more than $225 million worldwide.

So why has plastic been so fantastic?

“Every once in awhile a movie takes on a life of its own, and this one has,” Warner Bros. executive vice-president for distribution Jeff Goldstein told TheWrap. ‘It’s playing way beyond just families, and that’s because the pop culture references work so well with parents and adults. The writing (by directors Phil Lord and Chris Miller) really is fantastic.

“That been great because what’s surprised us is the number of people — not so much families — going to high-end theaters to see it,” he said, noting that the premium theaters and the 3D upcharges have provided an extra boost to its bottom line at box office.

The debuts of the two openers were in line with modest projections. But “Three Days to Kill,” from Luc Besson‘s EuropaCorp, cost just $28 million to make, while Constantine Film’s “Pompeii,” which Sony is distributing, cost at least $80 million to produce.

The opening “was right in line with our expectations” said a spokesman for distributor Relativity, which co-produced and co-financed “3 Days to Kill”  with EuropaCorp. The two companies also teamed on “The Family,” which debuted last year, and “Brick Mansions,” which Relativity is distributing later this spring.

The McG-directed “3 Days to Kill” drew a crowd that was evenly divided between men and women but 80 percent over the age of 25, and they gave it a so-so “B” CinemaScore. Amber Heard, Hailee Steinfeld and Connie Nielsen co-star in “3 Days,” which opened in 2,872 theaters.

“Pompeii,” from “Resident Evil” director Paul W. S. Anderson, featured “Game of Thrones” star Kit Harington. It was marketed as a disaster epic with a love story — a la “Titanic” — but it failed to connect; its audience, which was 52 percent male and 38 percent under the age of 30, gave it a lukewarm B CinemaScore. Carrie-Anne Moss, Emily Browning and Kiefer Sutherland co-star in the PG-13 action saga, which opened in 2,658 theaters.

“Pompeii” isn’t the first sword-and-sandals saga to go belly-up this year. Last month, Lionsgate’s $70 million “The Legend of Hercules” opened to less than $9 million and has topped out at $18 million domestically. Paramount is scheduled to join the toga party in July, when it releases the Brent Ratner-directed “Hercules,” with Dwayne Johnson as the Greek hero.

Kevin Hart’s “About Last Night” was one of two romance remakes that did well on Valentine’s Day but took their lumps this weekend.

“About Last Night” dropped a whopping 71 percent from its opening with $7.4 million and is at $38 million domestically after two weeks. Universal’s low-budget “Endless Love” update was off 68 percent from its debut and took in $4.3 million to raises its two-week domestic total to $20 million.

Disney’s animated blockbuster “Frozen” upped its domestic total to $384 million after adding another $4.3 million in its 14th weekend. Its global total is over $980 million.

The lyrical tale of a young man who loves airplanes and goes on to develop the Japan’s World War II fighter plane the Zero brought in $306,000 from 21 theaters. That’s a solid $14,359 per-screen average for the film, which Disney will open nationwide next weekend.

Couples made up 76 percent of its audience, and it received an “A-” CinemaScore.