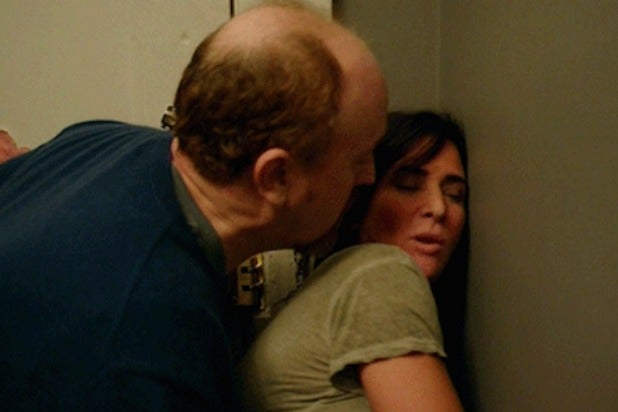 Louis C.K. has walked into a raging debate about televised rape.

In a scene in FX’s “Louie” on Monday, Louis C.K. (the writer-director-actor,  not to be confused with the titular character) deliberately complicated Louie’s motivations in a scene that stopped short of rape, but still raised questions about coercion.

In the episode entitled “Pamela (Part 1),” Louie delivers a decidedly feminist standup routine, then goes home and wakes his friend Pamela (Pamela Adlon), who has been babysitting his daughters. He forcibly tries to make her stay in his apartment and kiss him. He holds onto her, pulls up her shirt, holds the door shut, and finally makes her accept an unwanted kiss. She rejects him throughout.

“This would be rape if you weren’t so stupid,” she says. “God, you can’t even rape well.”

The kicker of the sequence is Louie closing the door after Pamela leaves and pumping his fist at what he apparently considers a romantic triumph. This is how delusional he is: Any kiss is a good one, even one taken by force.
Also read: ‘Game of Thrones’ Finally Punishes a Rapist, Not That That’s a TV Show’s Job
“What on Earth Is Louis CK Trying to Say About Rape,” asked the headline of  a Vanity Fair article, which noted that the episode “ended with a fairly troubling scene and on a truly baffling note.”Alan Sepinwall said in his recap of the episode for HitFix that C.K. could be “making fun of his fictional alter ego, or it could come across as wildly insensitive and tone deaf.”

But those were the less personal reactions.

In his much-discussed review for The Onion AV Club, Todd VanDerWerff recounted how he once blocked his wife from leaving their bathroom during a huge argument. He recalled the “terrifying power surge through me” and expresses his profound regret. He says the point of the episode carried on a “motif of men committing violence against women — even unknowingly — to its logical conclusion.”

Writing for Nerve, Beejoli Shah said she had experienced sexual assault, and wasn’t interested in understanding an assailant’s thought process.

“No matter how much I’ve respected Louis C.K.’s work until now, I’ll never be watching his show again,” she wrote. “I no longer care about understanding the other side of evil,” she said. “I already understand it. I have no sympathy for it, in my life, or on screen. … [U]sing assault as a device, simply to show a character’s faults? I already knew Louie was flawed. I didn’t need to know that Louis C.K. was too.”

She also said that on a “basic, court-defined level,” Louie’s behavior on the show was sexual assault.

In the past, our more shameless TV shows have used rape as a dramatic tool or narrative shortcut: They may, for example, add a rape to make us hate the villain who commits it even more than we already do. Some shows have presented supposedly debatable scenarios — but what if both students were drunk? — to educate viewers about the fact that not all rapes are committed by a stranger in a dark alley.

Those portrayals began long before our age of Twitter and recaps, in which critics and fans instantly debate the meaning of a given scene. And those portrayals, even the ones meant to spur debate, tend to be much more straightforward than the ones we’ve seen lately.

Today’s TV rapist — or possible rapist — tends to be a character we know.

On recent episode of “Girls,” “Game of Thrones,” and “Louie,” we have seen characters we once liked get overly aggressive, in scenes that continue to be debated. Some “Girls” fans contend that Adam, Hannah’s main love interest on the show, clearly raped his girlfriend last year. But the show still presents him in an often positive light.

The New York Times ran a front page story on Jaime Lannister’s rape of his sister on “Game of Thrones” this season, and the critical fallout that resulted when the episode’s director said the sex was ultimately consensual. Jaime has suffered no consequences so far, and almost became the savior of his brother Tyrion, who is arguably the hero of the show.

But Louie isn’t a supporting character like Adam or Jaime. He’s the main focus of every episode. And the scene, already provocative on its face, arrived a week after a 22-year-old virgin killed six at UC Santa Barbara after expressing a hatred of women.

If Louie were charged, he would no doubt claim to have misread the situation — horribly. The reasons for his misunderstanding are piled on over multiple episodes. We see how Louie might see himself a good guy who would never commit an assault, even as he commits an assault.

In the previous episode, Louie saved his wife and daughters from a flash flood, and parted ways with Amia, a Hungarian girlfriend. Pamela recently told him, after years of rejection, that she was potentially interested in “a girl/guy kissing thing.” But she retracted that interest when she learned of Amia.

Another wrinkle: Two episodes ago, Louie and Amia kissed in the same doorway where Louie forced a kiss on Pamela. There’s a language barrier, and though both say “bye,” repeatedly, it’s obvious neither wants to say bye. After the kiss, they move through the apartment, groping around in darkness. But everything sounds consensual. Louie apparently expected a repeat of the situation with Pamela.

But that’s exactly the kind of rationalizing Shah rejects, because nothing justifies an attack. An assault is an assault, whatever the assailant believes it to be.

Louis C.K. may be making exactly that point — but he isn’t spelling it out. In the ultimate provocation, “Pamela (Part 2)” won’t air for two weeks, because another storyline will interrupt it.

“I wonder if the show’s creator and star Louis C.K. is aware of how Twitter and Facebook and recap culture have changed the way we watch TV, particularly by putting social pressure on viewers to have a loud and definite opinion on an episode right now,” wrote Vulture’s Matt Zoller Seitz. “I wonder if he’s airing the episodes in an order that encourages everyone to jump to conclusions that they’ll have to retract, qualify, or amend later. I don’t think this is the only thing he’s doing, mind you — but it’s not hard to imagine that it’s at least a part of it.”

Is C.K. making an example of his character? Or joining the legions of TV writers who have used rape just to incite us? We’ll find out in two weeks. Maybe.