Pixar’s “Lightyear” (which is now playing exclusively in theaters) serves as the big screen sci-fi adventure that eventually led to the toy that Andy was gifted at the start of the first “Toy Story”. It expands the “Toy Story” universe in surprising and meaningful ways. And introduces us to an all-time Pixar sidekick in the form of his robotic cat pal Sox.

In “Lightyear,” Buzz (now voiced by Chris Evans) is an intrepid Space Ranger who, driven by ego and a truly righteous sense of self, accidentally maroons his fellow space travelers on a harsh world full of treacherous vines and creepy bug creatures. Determined to figure out a way off the planet, he attempts to crack lightspeed travel and finds himself in a strange loop – each time he makes a test flight, he returns to the planet a few minutes later but several years have passed. As a way to help ease Buzz’s transition to his life as an inadvertent time traveler, Star Command gifts him Sox (voiced by Pixar filmmaker Peter Sohn) – a genial cat robot meant to serve as his emotional support animal (he also enjoys complicated chemistry problems while Buzz is away).

As Buzz’s attempts to save the colonists become more desperate, Sox becomes an unlikely ally and, as Buzz discovers other survivors looking to fight back, a key member of the team. To say that Sox steals every scene is the understatement of the year. Designed by Pixar artists like Matt Nolte and Dean Heezen and built by Michael Comet, the cat, pragmatic and hilarious, is arguably the beating heart of the movie – he serves as an early reminder to Buzz of the benefits of teamwork and camaraderie. Judging by the early responses to the film and the amount of tie-in merchandise (including a $400 life-size version from Super7), Sox is a clear standout.

When TheWrap asked co-writer/director Angus MacLane and producer Galyn Susman when they realized that Sox was going to be a superstar, they said immediately. “Right away. Pretty quickly,” MacLane said.

While Sox might immediately bring to mind Jonesy from “Alien” and “Aliens” (“Aliens” is MacLane’s favorite film), he said that Sox’s coloring wasn’t an explicit reference to that James Cameron classic. “I mean, we tried different colors even, and I ended up going with orange because it just stood out better from the rest of the outfits,” MacLane explained. “Obviously from Morris the cat to Garfield to Jonesy, there’s a rich history of orange cats in popular culture, but it just ended up being a contrast thing.” Sox’s design also combines the movie’s aesthetic directive of being “chunky” like consumer products of the late ‘70s and early ‘80s. “He feels very much like a robot of that time,” MacLane said.

There is an anecdote from “Star Wars: The Force Awakens” editors Maryann Brandon and Mary Jo Markey who said that whenever there was a lull in the narrative, they would cut away to a reaction shot from BB-8. Susman confirmed the same was true of Sox and “Lightyear.” “If [a scene] wasn’t working, we would throw in Sox and see if we could fix it that way, at least temporarily,” Susman said. “Then we would go back and really try to fix him.”

The animators loved Sox too, given his limited range of motion and the way that he types on his computer keyboard like you’d probably imagine Teddy Ruxpin would do it. MacLane described Sox as “Muppet-y” (that line down Sox’s face is what he refers to as a “Henson stitch”).

“Part of it was wanting to have a rigid character in a world of more realistic animation. It would stick out, and you would get comedy through motion,” MacLane explained. “We’re not doing animation that’s drawing attention to itself and being appealing in kind of an animation way. It’s not an overly animated film in that way, where there’s no superfluous motion for whimsy. But with Sox, you get comedy from cat on a keyboard, like that kind of thing. That was always the kind of comedy that we wanted. And Sox, of course, is inspired by animatronics of the 80’s where you’re like, ‘This is obviously not fooling anybody. That’s not actually a cat.’ But I just think it’s really funny. It’s really charming, and it’s limiting the motions so the audience can get into it.”

But would Sox have worked if some big name comedian had voiced the character instead of Sohn? MacLane says no. “The thing that Pete has, just in thinking about that, is that he shouldn’t be funny by jokes. He doesn’t make jokes. He’s very earnest, and his comedy comes from being true, and warm, and positive, or just calling it the way it is,” MacLane said. “He, in many ways, is the voice of the audience reacting. He’s the pressure release valve.” 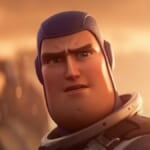 We asked Evans if his relationship with his very social media-worthy dog Dodger inspired Buzz’s relationship with Sox. “I was hoping that Dodger informed the creation of Sox,” Chris Evans joked. “That’s not the case. But you can’t deny the coloring. It’s pretty similar.”

But what it is it like to write music for Sox?

“Sox is there to make sure you’re okay,” Oscar-winning composer Michael Giacchino — who has written the scores for earlier Pixar classics like “Coco” and “Up” — told TheWrap. “He’s always there to always check in on you and make sure you’re good. He’s caring for you when no one else is. So anytime I tried to do something for him, it felt wrong in a way. And Sox was his own theme in a way. That character handled that on his own. There’s a little bit of light fun when Buzz gets him for the first time. But I didn’t press to hard in that direction because it was just working as it was. Part of the job is to look at what’s in front of you and understand what needs you and what doesn’t need you. If it doesn’t need you, get out of the way and let it do its thing. And Sox was one of those things.”

Sox might be small and cute but a whole lot of work went into making him such an irresistible, utterly unforgettable character. 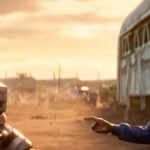 Also Read:
Does ‘Lightyear’ Have a Post-Credits Scene?