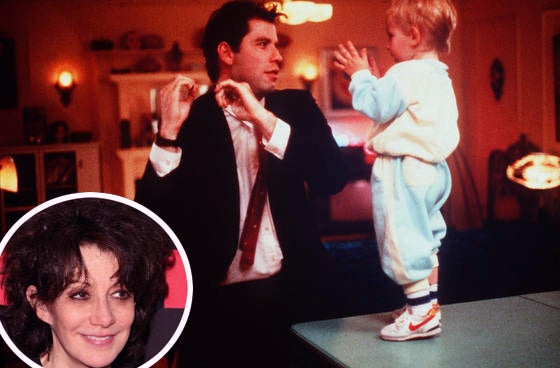 On this date 25 years ago, baby Mikey crawled into theaters to charm audiences in director Amy Heckerling‘s “Look Who’s Talking.”

The story centers around a baby whose thoughts the audience can hear, voiced by none other than tough guy Bruce Willis doing a little baby talk. The infant’s commentary follows Kirstie Alley, who plays his single, career-minded mom, as she falls for the new man in her life, a cab driver played by John Travolta.

It was an era when making the choice to enter single motherhood was quite controversial, and the film tackled the issue with grace and humor even before Dan Quayle called out “Murphy Brown.” The TriStar film ultimately took in over $140 million at the box office and spawned two sequels and a television series.

So now that a quarter-century has passed, Heckerling reveals to TheWrap some fun tidbits about the family comedy that charmed audiences worldwide.

Heckerling’s real-life pregnancy served as inspiration for screenplay
Heckerling had just given birth to her daughter when the idea for “Look Who’s Talking” hit her.

“I had a baby, she was a couple months old sitting on her baby seat on the table,” Heckerling told TheWrap. “We’d be making up lines and I thought, this is a movie.”

“I would have liked to do edgier, crazier stuff, but this just spoke to me,” Heckerling said. “I could see how this could work.”

John Travolta dancing was not in the original script
Heckerling didn’t have the notion of casting Travolta until she happened to meet with his longtime manager, Jonathan Krane, who asked Heckerling if there was a part in the film for his star client.

“He asked if there was anything in it for John,” Heckerling recalled. “I told him it would take a little rewriting because it was written for a darker kind of a character.”

So Heckerling tweaked the part to take advantage of Travolta’s skill set — dancing.

“That was the kind of thing I wanted to do with Travolta,” Heckerling said. “Because Travolta is a dancer. He can move, he can dance.”

That chemistry between Alley and Travolta? That’s real
Alley and Travolta spent a lot of time together during the production of “Look Who’s Talking.” In a 2012 interview with Barbara Walters, Alley called Travolta “the love of my life.” Later, she told Howard Stern that after meeting Travolta, it took her “years to not look at John as a romantic interest.” But since she was married it was hands off she claimed, as she was married to fellow actor Parker Stevenson at the time. Travolta, however, was single.

As a professional, Alley kept it together on set.

“It wasn’t like she went around being gaga over him,” Heckerling said. “Their friendship and their chemistry was really interesting.”

And really, who could resist Travolta?

“I knew that John was ridiculously charming and that they had chemistry together,” Heckerling said.

Puppetry of the fetus: How they made the unborn emote
When the film was produced in the late 80s, computer special effects were still in their infancy. So Heckerling called on Todd Masters to supervise the sequence with Mikey in the womb using both practical and visual effects

“It was my first use of visual effects,” Masters told TheWrap. “We called them electronic effects.”

Masters had to create five different states of Mikey in the womb, from zygote to fully formed baby ready to go down the chute. The fetuses are actually puppets, and some of the shots were quite complicated.

“We had one shot that took us 115 takes to get,” Masters revealed. “It was little Mikey playing with his placenta. … It required 12 puppeteers, people were hanging upside down.” The shot eventually was cut from the film.

And how about the shots of the sperm?

“The sperm were little vinyl sperm and little fishing weights in the front. They were dumped in a tank and they kind of cascaded through the water and picked up by the underwater camera.”

Heckerling was pretty impressed with Masters’ work. He’s since gone on to a long career in Hollywood and is currently the makeup effects producer on “True Blood.”

“He was practically still a teenager at the time,” Heckerling said of Masters’ early career achievement. “Todd had to be extremely clever. It was hard.”

Bruce Willis voice performance added the extra magic
We see plenty of talking babies in commercials nowadays, but that wasn’t a possibility in 1989.

“I was shooting like they did in the 1930s with film going by without the budget for a lot of film going by,” Heckerling said. She had to have several babies on set monitored by a baby wrangler to ensure that one would be in the right mood for a given shot.

“You would think it would happen, it happened with your kid. But it wouldn’t happen with this kid,” she said. “This was before digital stuff and before video playback.”

But when you have Willis as your voiceover talent, he saves it in post. Willis’s vocal performance sold Mikey and his inner world, giving a much needed spark to the character.

“Bruce Willis comes in and he has an amazing bag of tricks,” said Heckerling. “That adds another element.”

In other countries, however, Mikey’s voice was taken on by popular regional stars. The local flavor helped propel the film to international box office success.

“That was John Travolta‘s idea,” Heckerling recalled. “When they were releasing the movie in foreign countries, he had an idea of getting different celebrities in different countries to be cast as the baby. So you would have a Spanish or Italian star. …That made a very big difference in the appeal.”

How do you make George Segal’s head explode? Weather Balloons
“We met with George Segal and molded him, we made a fake head” recalled Masters. “We crammed weather balloons into the cheeks.”

But they had to make the head inflating comedic enough that it wasn’t horrifying. It was a family movie, after all.

“The way things have changed. the pictures in the womb they have now. They’re just amazing. They’re just like a snapshot of a person,” said Heckerling.

But the director doesn’t regret doing the film low tech.

“I feel that it was better that we were so low tech. There was something with those babies that do stuff like sell insurance,” said Heckerling.

She added, “no babies were harmed in the making of this movie.”