There’s an unexpected but important moment in “Man of Tai Chi” when the film goes from being a self-serious, mostlystraightforward martial-arts film to something weirder and sillier – the catapult that sends it way over the top.

It’s not hard to spot — it involves Keanu Reeves breaking the fourth wall to roar at the camera — but it’s likely the moment that you decide whether you want to go on its propulsive but inescapably goofy ride. A directorial debut by Reeves that perfectly suits the actor’s charmingly uneven efforts in front of the camera, “Man of Tai Chi” is an earnest, polished action film that perfectly captures both good and bad elements of those that inspired it.

Tiger Chen, a stunt man on Reeves’ “The Matrix” sequels, plays himself — or at least a character with the same name. A proud (and rare) practitioner of tai chi, Chen works odd jobs to support himself while preserving the integrity of his martial art of choice, which means no fighting for money. But after a bank threatens to foreclose on the temple of his master Yang (Yu Hai), Chen receives an offer he can’t refuse: get paid handsomely to battle for Donaka Mark (Reeves) in an underground fighting ring.

Quickly rising through the ranks of competitors, Chen enjoys his first taste of wealth, even as the brutality of his matches begins to weigh on his mental well-being. But after Donaka demands that he battle in a literal death match for the title, Chen begins to reconsider the path that he’s taken to success. 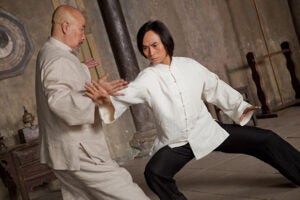 Reeves directs the film with an understated proficiency that reflects the influence of the accomplished and inventive filmmakers that he’s worked with as an actor, but he adds unique flourishes that emphasize the metaphysical aspects of Michael G. Cooney’s script as well as its action. Often staging scenes with his performers directly addressing the camera, he infuses the fight scenes a visceral energy that gives them a first-person immediacy without sacrificing the intensity — and often, beauty — of the choreography.

As a storyteller, on the other hand, Reeves can’t always sustain a consistent balance between the various ideas that he wants to explore, eventually sacrificing details about, say, the tenets of his martial art in order to shuffle Chen towards his climactic confrontation.

The main character’s relationship to his master is one that Reeves obviously thinks is essential to the story, and yet little more than lip service is paid to what appears to be the ultimate goal of practicing tai chi — namely, achieving an equilibrium with an opponent by harnessing one’s own inner energy. Although Chen’s journey is completely familiar to anyone who’s ever watched an underdog story, “Man of Tai Chi” would actually benefit from a slightly more pronounced narrative throughline, where the character’s descent into darkness is truly precipitous, making his redemption feel like a spiritual as well as physical victory.

On the other hand, there is Reeves’ aforementioned outburst, which somehow permeates everything that happens before and after it, giving the film a cartoonish theatricality that, quite honestly, suits the tradition of classic martial-arts moviemaking. In typical form, Reeves’ performance is a blend of earnest character development and stagy exaggeration – precisely the qualities which make him such a great action figure, and a decidedly less consistent “serious” actor — but it hits all the right notes required of a Mephistophelean villain.

Chen, meanwhile, lacks the charisma to make his eponymous character truly dynamic — or give his journey the melodramatic pitch it needs – but he serves the film’s moments of earnestness well with a rigid, naïve sort of sincerity.

Ultimately a slightly updated version of the kind of meat-and-potatoes competition story that helped introduce Western audiences to martial arts in the first place, Reeves’ film offers serviceable action without doing much to introduce the world to the deeper complexities of tai chi. (A better title might have been “Game of Dearth.”) Nevertheless an effective combination of superlative physical skill and the veneer of a philosophical foundation, “Man of Tai Chi” is fun and exciting enough to keep audiences truly entertained, but it lacks the spark necessary to make their souls roar.