The end is nigh for “Manifest” — and maybe the world. The canceled-too-soon NBC series was revived by Netflix after a devastating Season 3 finale for one last, extra-long season, and the first 10 episodes delivered one game-changing revelation after the next, including the threat of apocalypse.

Indeed, over the course of the season, we learned that the Death Date isn’t just for passengers — it’s for the whole world. We also made contact with Divine Consciousness, found out the Callings are memories, discovered the powers of the Omega Sapphire and reunited with a ton of 828ers. And it’s a good thing there are 10 more episodes to go, because things are looking pretty dire in the Part 1 finale. 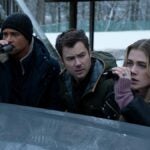 At the top of the episode, we learn that Angelina stole the Omega Sapphire from Eagan and she’s already wreaking havoc, splitting the ground beneath her as she invokes its power. Michaela is seeing visions of ash falling from the sky, and even scarier, Cal is visibly on his deathbed, his health rapidly declining after his cancer returned earlier in the season. He insists his family go on the search for the Omega Sapphire so that they can save themselves from the death date — and possibly save him with the gem’s powers.

Ben gets a Calling and speaks to his dearly departed wife, Grace. She tells him to bring Eden to her and it will “all make sense” so Ben takes Eden to Grace’s grave, where he has another “Calling.” But when Grace tells him to take Eden back to Angelina, he realizes that her eyes are the wrong color. It’s not really Grace. It’s Angelina, wielding the Omega Sapphire’s powers and she’s holding Ben at gunpoint, snatching up Eden once again, right in front of him.

But Ben has the idea to let Eden decide who she wants to be with. Much to Angelina’s chagrin, Eden says she wants to be with her daddy, and Angelina fires her gun at them wildly as Ben runs off with Eden in his arms. In a fit of rage, Angelina clutches the sapphire and screams, causing all of the 828ers — no matter where they are — to clutch their heads and scream in agony.

At the precinct, Jared officially joins the Registry after his re-promotion, where he can be “more help to 828ers inside the belly of the beast,” as Drea puts it. When Angelina screams, so do all the 828ers. Calls pour in from regional offices “across the country,” where every single passenger just exhibited the very “particularly onerous or unusual behavior” the Registry is meant to investigate, leading to a mass lockup. By the end of the episode, the order is to detain every 828er in the country.

Jared heads off to track down the Omega Sapphire with Michaela, leading them to Eagan’s hospital room, where Michaela finds the book she saw in an ominous Calling — a book Eagan lifted from Angelina’s mom — and experiences a vision of a faceless angel shattering like stained glass. The very same vision Angelina had in Season 3 that led her to her old school in Syosset; a mystery that Olive quickly helps Michaela solve.

There, Michaela and Ben discover a terrifying sight: Angelina is transforming the ground beneath the church into molten lava — trapping innocent children inside. Worse, she now believes she is an archangel “sent to bring vengeance upon the evil and lead the righteous to salvation.” 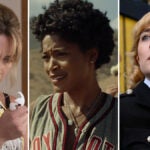 Also Read:
The 25 Best New Movies to Stream in November 2022

At the lab, Saanvi and Vance realize that with the Omega Sapphire, Angelina can give passengers fake Callings, a discovery that rattles them when they realize passengers won’t be able to tell what’s a real Calling and what Angelina is willing them to do. Saanvi calls Dr. Gupta for help; a decision that proves to be a mistake when Dr. Gupta rolls up with heavily armed government forces and shuts them down.

But first, Saanvi discovers that Cal’s scar tissue is glowing — it’s sapphire, just like she saw on Ben’s hand after he touched the tailfin. At the same time, Cal’s scar starts moving and he realizes he is a “dragon” like Henry Kim told him. He pulls Angelina into a Calling where they duke it out with their Sapphire powers while Ben and Mick rescue the people trapped in the church. The Stones escape the collapsing church, believing Angelina is dead after the sapphire shatters and pieces of the building collapse on her.

Not only is Angelina not dead, she fused a fragment of the Omega Sapphire with her hand after reaching into the lava to retrieve it, and as she furiously walks out of the church, more powerful than ever, the camera pulls back to reveal rivets of volcanic lava flowing from the church, turning the earth around her into an apocalyptic landscape.

Back at the Stone household, Olive deduces that Cal is the Dragon, that he can even the scales and save all of humanity from the Death Date, “But who can save Cal?” Zeke overhears and realizes what he has to do. Using his ability to absorb pain, he absorbs Cal’s cancer, making one final heartfelt call to Michaela. She arrives just as he dies and tells her, “It’s ok my love, I’ll see you again under the stars.”

So is Zeke really dead? Tragically, yes, but in the world of “Manifest,” that doesn’t necessarily mean he’s gone. And, according to series creator Jeff Rake, the discovery of divine consciousness just might mean that Zeke and Michaela find a way to communicate “even beyond Zeke’s death.”

“The characters on “Manifest” end up subscribing to that idea of Divine consciousness sort of by necessity,” he continued. “It gets them through the day. It helps them believe that there’s a way around this death date that they’ve been saddled with. And ultimately, for the several characters on “Manifest” who are lovers, some of whom are separated. Like [Zeke] and Mick… hopefully, divine consciousness will help them have an opportunity to communicate with each other.”

And that potential for communication through divine consciousness is poised to become a major factor in the final episodes. “It’s just a powerful concept: after we lose loved ones, that maybe we’ll have an opportunity to communicate with each other again,” Rake said. “That becomes a big concept in our final block of 10 episodes, spoiler alert. But I think it’s a very powerful concept to hold in our hearts, to get us through the day, especially in regard to the loved ones who we’ve lost. And, and also just to get us through the day when we’re dealing with hard times.”

Speaking of hard times, Angelina is shaping up to quite the adversary to the Stones and humanity itself; convinced she is an archangel doing the lord’s work, emboldened and more powerful than ever, and seemingly a force pushing the world toward the death date rather than working with the other passengers to prevent it. She’s also become one of the most effective and infuriating villains in recent memory, sparking an ire in fandom rarely seen since Joffrey in “Game of Thrones.”

But what is “Manifest,” a show about humanity striving to prove itself after being challenged by the divine, if not a story of redemption and second chances? Can Angelina still be redeemed or has she fully become the series’ big bad? That becomes one of the most important questions in the series, according to Rake.

“Angelina certainly pushes the envelope to the point of the envelope ripping into infinite shreds, when you talk about the possibility of redemption,” he said. “You look at her and you ask yourself, ‘How can how can someone like that possibly be redeemed?’ And that’ll be a big question all the way to the series finale. The question of, you know, can someone like Angelina be redeemed? Not even ‘someone like’ — can Angelina be redeemed? [That] is a question that kind of runs through the episodes all the way through to series finale.”

The answer to that question will have big ramifications for Ben Stone, in particular, who lost his wife and years of his daughter’s life because of Angelina. Rake added that the question of Angelina’s redemption “thematically really is one of the most important questions in the series in regard to Ben’s possibility of redemption. Because, of course, no one despises Angelina, more than Ben Stone.”

Looking toward the final 10 episodes, Rake revealed, “We come to discover late in series that Ben’s ability to forgive and the concept of forgiveness, at least for Ben, becomes in inherently tied into his ability to redeem himself. That becomes one of the most important questions in the series.” 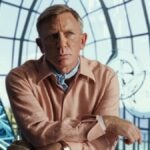