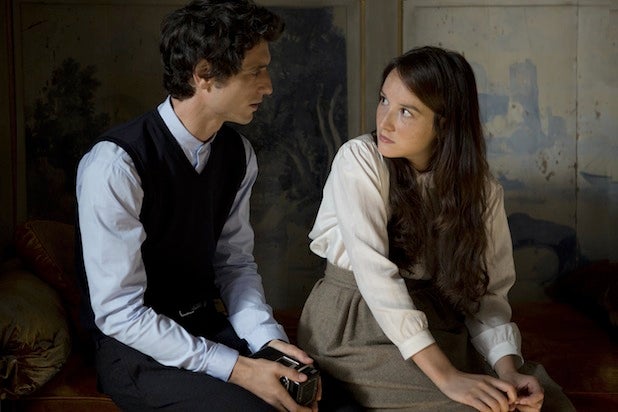 There is always that one movie in Cannes. It’s “the child molester movie” or “the father- daughter incest movie” or “the middle-aged women paying for impoverished sex workers movie.” Now we have “the brother-and-sister incest fairy tale.”

That pretty well sums up “Marguerite & Julien,” a film with a bit of a backstory. Author Jean Gruault once wrote a screenplay for Francois Truffaut called “History of Julien & Marguerite,” the true story of a brother and sister who were executed for adultery and incest. Truffaut was planning to make it into a sweeping epic in the 1970s.

Donzelli then took up the project. The film will be released in France and perhaps in the U.S., though I suspect it will have a somewhat difficult time with American audiences. It must be said that Donzelli is a brilliant director and “Maguerite and Julien” is magnificent in places, particularly in how it looks.

As played by Jérémie Elkaïm and Anaïs Demoustier, the brother and sister generate palpable sexual tension and do a good job depicting intense, unbeatable, unrestrainable love. They are soul mates. Their love defies all convention. There is no point in trying to fight it nor destroy it by separating them. Death would be the only separation.

Donzelli makes a few crucial choices, though, that probably doom the film for critics. At the film’s first press screening on Monday night, there were many walk-outs and a few boos at the end.

Her controversial move is to bookend the film with scenes depicting a young woman telling the story to a room full of intently focused children in an orphanage. But when we think about fairy tales, we don’t typically think about incest.

Donzelli plays with the frame in a manner reminiscent of Martin Scorsese, but several of her flourishes happen at random and not consistently. In those moments, where she allows herself and her camera to step out of the traditional filmmaking, she really shows us what she can do.

There is an especially interesting moment when the siblings are caught in the act. Capturing the moment in millennial paparazzi-style stills, all of their romantic illusions are stripped away and they are made to look like deviants. She throws a helicopter in there, too, just to make sure you know this is a movie and not real life. All the same, the humor is too intermittent to make it as stylized as, say, “A Clockwork Orange” or “Trainspotting,” films whose style would have suited the material a bit better than a period romance.

Despite these missteps, it’s impossible to ignore Donzelli’s talent. Her visuals are arresting, both in how she captures moments on faces as well as atmosphere. “Marguerite & Julien” hints at what she’s capable of, in a way that reminded me of Maiwenn’s film that also screened in this year’s competition, “Mon Roi.” Both are about relationships. Both showcase talented directors whose films are enjoyable and entertaining though imperfect.

See photos: ‘Inside Out’ Cannes Review: Pixar Invades Cannes With One of Its Richest, Best Movies

At this year’s festival, the majority of the best films are centered on women, and two women are competing for the Palme d’Or. Times, at least here in Cannes, could be changing. Here’s hoping.