Matt Gaetz and Marjorie Taylor Greene’s names on the speakers slate for a Southern California “America First” rally scheduled for next weekend was enough for the Orange County venue to cancel the event.

“As soon as we found out who the speakers were we immediately canceled it,” Javad Mirtavoosi, general manager of Pacific Hills Banquet & Event Center, said, adding that when the event was booked, they were just expecting “a gathering.”

“We just want to stay clear of that,” Mirtavoosi told the Orange County Register. 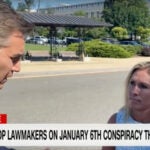 The Laguna Hills hotel canceled the rally originally scheduled for July 17 on Friday, citing the two controversial GOP representatives presence at the event. The venue declined to confirm whether the cancellation was based on political differences, saying instead, “We just thought it would be best for our facility to cancel.”

Nonetheless, Greene’s name began trending on Twitter Saturday with many users speculating exactly that politics had everything to do with it. Gaetz’s campaign denied to comment, but Greene’s team disputes the venue’s story surrounding the circumstances of the cancellation.

“Although the accounting of the venue cancellation is totally inaccurate, we’re very close to securing a location that will proudly host our America First Rally with Congresswoman Greene and Congressman Gaetz,” Nick Dyer, a spokesman for Greene’s campaign, said Friday afternoon. 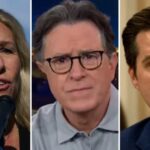 Tickets are continuing to sell for the event, which will be held elsewhere on the same date.

The “America First” tour kicked off in May at a retirement home in Orlando, Florida. Its various cross-country stops have seen Gaetz and Greene tearing into enemies on both sides of the aisle, from Rep. Alexandria Ocasio-Cortez to so-called RINOs — “Republicans in Name Only” — who oppose former President Trump’s agenda.

In recent months, Greene has come under fire for her repeated references to the Holocaust, as well as her conspiracy theories regarding the Capitol insurrection. Gaetz is currently under investigation by the FBI over allegations he was involved in sex trafficking with a former tax official.