Florida Rep. Marjorie Taylor Greene is distancing herself from white supremacist Nick Fuentes — the morning after she spoke at his event.

At the Conservative Political Action Conference (CPAC) on Saturday, CBS News’ Robert Costa questioned Greene about her surprise appearance at Fuentes’ America First Political Action Conference the previous night alongside Arizona Rep. Paul Gosar. Fuentes has been identified by the Anti-Defamation League as an online personality who has regularly spread racist and anti-Semitic theories, including “Great Replacement Theory,” which claims that white communities are being replaced by people of color.

A video leaked from Fuentes’ event Friday also showed him leading the crowd in cheering on Vladimir Putin and Russia’s invasion of Ukraine. 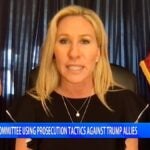 Greene said she appeared at the event to “talk to them about America First Policies” and “what’s important for our country going forward.”

“I do not know Nick Fuentes,” Greene told CBS News. “I’ve never heard him speak. I’ve never seen a video. I don’t know what his views are, so I’m not aligned with anything that may be controversial. What I can tell you is I went to his event last night to address his very large following because (it is) young. It’s a very young following and it’s a generation I’m extremely concerned about.”

“As Rep. Marjorie Taylor Greene and Rep.Paul Gosar speak at this white supremacist, antisemitic, pro-Putin event, silence by Republican party leaders is deafening and enabling,” Cheney tweeted. “All Americans should renounce this garbage and reject the Putin wing of the GOP now.” 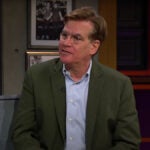