Magic can be found in the most unlikely places in Kate Tsang’s debut feature “Marvelous and the Black Hole.” Like, for instance, the restroom at a community college summer program, where rebellious and angry teenager Sammy (Miya Cech, “Always Be My Maybe”) meets her unlikely mentor Margot (Rhea Perlman), a children’s magician who sets her on a surprising journey of personal healing.

“Marvelous and the Black Hole” is a whimsical coming-of-age story about processing life and loss through storytelling and sleight of hand.

Sammy, who has been grieving her mother’s death through bouts of light vandalism, is presented with a choice by her stern father, Angus (Leonardo Nam, “Westworld”) after her latest infraction, which resulted in a toilet paper-filled bathroom stall, a sweet shiner and disciplinary action. She can either attend a summer course in entrepreneurship (with perfect grades) or get sent to a “scared straight”–style military camp. Sullen Sammy reluctantly decides to comply with community college.

That’s where Sammy runs into Margot, who doesn’t tolerate Sammy’s bad-girl posturing. Though they are initially at odds, Sammy takes an interest in Margot’s magic routine after watching her delight a classroom full of small children with a trick that sees her blazer explode with colorful blooms (delighting even the hard-nosed Sammy, too). She uses the meet-cute to inform her instructor (Keith Powell, “30 Rock”) that she’s found her class project, though it’s more of a quickie excuse in the moment, unaware of what learning magic will do for her.

“Marvelous and the Black Hole” (the title refers to how Sammy sees Margot and herself) is, structurally, a very traditional tale about a misfit coming into their own, despite themselves and the obstacles they see around them. But that familiar story serves as a mannequin for Tsang to dress up with her own personal style and sensibility, serving as a calling card for what Tsang can do with cinematic storytelling. 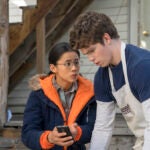 Also Read:
‘The Half of It’ Film Review: ‘Cyrano de Bergerac’ Gets a Gay High School Spin

The writer-director has a playful style that’s quirky and colorful, utilizing text, animation, archival footage and a particularly energetic edit (by Ryan Denmark, “We Have Always Lived in the Castle,” and Cyndi Trissel, “Two Sentence Horror Stories”) that’s at times almost jarring, mimicking the violence of Sammy’s dark attitude. The rhythm smoothes and slows after Sammy starts to unwind the tangled knot of emotions she’s carrying around, thanks in large part to time spent with Margot and her magician pals, as well as finally hitting rock bottom in her relationship with her father.

Much of Sammy’s anger is directed at her father’s new girlfriend, Marianne (Paulina Lule, “Agents of S.H.I.E.L.D.”), and her father himself, for moving on after her mother’s death. Her sister Patricia (Kannon) isn’t as bothered by the new woman in their lives, wrapped up in her own online role-playing game. When her father informs the girls at an arcade that he and Marianne intend to marry, Sammy explodes, and family life goes from bad to worse. She throws herself into mastering magic tricks with Margot as both a distraction and an outlet.

Not much exposition is given to the death of Sammy and Patricia’s mother, but it’s not necessary. Her loss is acutely felt all the same, and Sammy falls asleep listening to bedtime stories her mother recorded for her. Tsang visualizes these bedtime tales about an ancient Empress as an old-fashioned black-and-white movie, and this film-within-a-film serves as a thematic throughline as Sammy walks through her own journey of learning to share her emotions and to tell her own story. 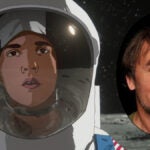 Also Read:
How Richard Linklater Made His Animated Fantasy ‘Apollo 10 1/2’ Feel So Realistic: ‘Everything Is a Magic Trick’

That process is aided by Margot and her band of merry magic-makers. Margot’s own backstory is slowly revealed, and it turns out that two have much more in common than meets the eye. Margot’s ability to turn a tragic tale into a magic one is what ultimately inspires Sammy to turn things around with her own family. Though learning magic is initially a last-minute project for her entrepreneurship class, the endeavor becomes an opportunity to let her guard down, share her emotions and redeem herself with her father. The relationship with Sammy even inspires Margot to explore the losses in her own past, as well.

“Marvelous and the Black Hole” follows a traditional story blueprint, the one in which a local loner finds a quirky friend and ultimately salvation during some kind of school-based performance — wait a minute, is this “Napoleon Dynamite”? — but Tsang embroiders this pattern beautifully with a clear voice, bold aesthetic, and heartfelt script.

Cech and Perlman find a nice chemistry as this unlikely odd couple: It’s nice to see Perlman, as great as ever, in a co-starring role this substantial at this point in her career. Cech is no doubt an upcoming star to watch, capably holding her own as she both carries the film and balances Sammy’s many complex relationships. “Marvelous and the Black Hole” proves to be a small marvel of an indie gem and an assured debut for Tsang.

“Marvelous and the Black Hole” opens in US theaters April 22.