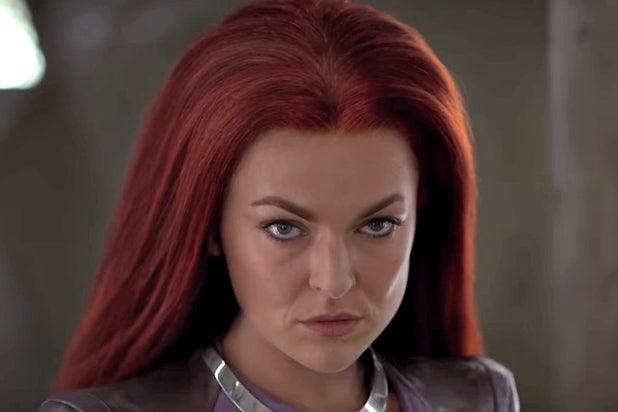 Are things getting hairy for “Marvel’s Inhumans”?

The new ABC drama series premiered in IMAX theaters nationwide today, giving fans their first chance to check out the show that has been hit with criticism of its trailers, particularly surrounding the wig worn by Medusa (Serinda Swan) that some people thought looked fake.

Many of the fans who got to see the first two episodes in theaters have already taken to social media to offer their thoughts. To be fair, there are certainly fans who are praising the episodes, but there are also plenty who agree with the previous flak.

“Lousy editing, cringeworthy performances due to laughably on-the-nose dialogue, no tension whatsoever, pretentious slow-motion action scuppered by the limited budget, dramatic sequences which unintentionally had the audience in stitches,” tweeted one user.

“Not only is #Inhumans not worth paying for to see early in IMAX, it’s probably not worth watching for free in 2 weeks on ABC,” wrote someone else. “It demands an immediate attachment to these characters that it hasn’t earned. Why should I care about bad wig lady or hoof man?”

A third person tweeted, “#Inhumans is like someone wanted to make THOR, but s–ty.”

Some fans were delighted by what they saw, while a number of other tweets that were technically positive were still rather measured in their positivity.

“I saw #Inhumans in IMAX today and I gotta say that it’s really not THAT bad,” one user wrote.

Channing Dungey, entertainment president for the network, acknowledged at a press event earlier this month that the show initially received negative fan reaction to the wig. She added that the show is “still a work in progress.”

Check out a range of tweets below.

The joy upon my face at the realisation that I could finally leave the auditorium, after seemingly an eternity, says it all. #Inhumans

What didn't work: everything else. Lousy editing, cringeworthy performances due to laughably on-the-nose dialogue, no tension whatsoever, ..

Not only is #Inhumans not worth paying for to see early in IMAX, it's probably not worth watching for free in 2 weeks on ABC. ????‍♂️

It demands an immediate attachment to these characters that it hasn't earned. Why should I care about bad wig lady or hoof man? #Inhumans

#Inhumans was decent imo, prefer it to the first two eps of legion. Blackbolt is basically a mutant Mr Bean ????

Just a quick reminder, I saw the #inhumans and I really didn't like it; a thread https://t.co/LduuGRPsF7

#Inhumans at @Cineworld #IMAX was okay, it sets the scene, but worth paying extra to see in this format, not quite. Only a handful watching.

#Inhumans is like someone wanted to make THOR, but shitty

PSA: Do not see Inhumans, even if are fans of the comics. Worst @Marvel live action project yet. WTF happened. Acting so bad. #Inhumans #fb

Just saw #Inhumans in IMAX and it was pretty good. Had some dumb parts but looks to be a nice show. Also great casting for the Royal Family

So I just finished watching #Inhumans and I must say it WASN'T THAT BAD ???? A few problems here and there. I'm willing to give it a chance

not one seat sold for #Inhumans tonight lmao pic.twitter.com/pAXROp92wk

Back from IMAX #inhumans – with a break for #highrollersdnd – I enjoyed it. Maybe not the vision a full movie could've been, but still fun.

I saw #Inhumans in IMAX today and I gotta say that it's really not THAT bad. Honestly. I can understand the criticism but still….

Just got out of #Inhumans. Really freaking awesome! Screw the dumb reviews. Marvel has done it again! Can't wait for the whole series!!!

Noteworthy that #Inhumans marks the very first time you’ll be outright relieved the TV stuff doesn’t get to crossover with the MCU.

Hector's words the second the credits rolled for Marvel's #Inhumans…

“Marvel’s Inhumans” is in IMAX now for a two-week run before its two-hour ABC launch on Sept. 29.

25 Worst Reviewed Superhero Movies of All Time, From 'Catwoman' to 'Green Lantern' (Photos)

“Wonder Woman” is one of the best reviewed superhero movies ever, but see which ones were duds

The superhero genre has come a long way. "Wonder Woman" has claimed the title of one of the best reviewed superhero films ever. But critics haven't always been kind to caped crusaders. Based on their Rotten Tomatoes score, these are the worst superhero movies according to critics.