This story about “Mass” first appeared in the Race Begins issue of TheWrap’s awards magazine.

Writer-director Fran Kranz’s “Mass” is a low-budget indie drama that was shot mostly in a single room over the course of two weeks, but its main cast — Reed Birney, Ann Dowd, Jason Isaacs and Martha Plimpton — are as fine a definition of ensemble acting as you’ll find on screen this year. That idea was reinforced when Kranz, the cast and casting directors Henry Russell Bergstein and Allison Estrin were selected as this year’s recipients of the Film Independent Spirit Awards‘ Robert Altman Award. (Kranz also scored a nomination for Best First Screenplay.)

The foursome, who spend most of the film sitting around a single table talking to each other, navigate through a searing conversation between one couple whose son was killed in a school shooting and another whose son was the shooter. Isaacs and Plimpton play Jay and Gail, a grieving couple who ask for the meeting on the advice of their therapist but are reluctant to go through with it, while Birney and Dowd are Richard and Linda, whose marriage has fallen apart in the aftermath of the shooting spree that ended with their son’s suicide.

The mood was light when the actors sat down to talk about the film, though it would take some detours later. 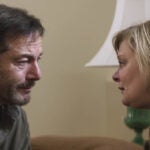 Is it possible to have lightness and humor when you’re shooting a film as serious as this one?
JASON ISAACS It was essential, because emotions run so high during the filming of it and the living of it. It was a heightened experience. We laughed like idiots, and we clowned around like idiots, and we cried like heartbroken people.

REED BIRNEY We really did have a ball. But part of it was, I think, because we knew how special this experience was and how rare. In my experience, I don’t get to have a part like this, and so to be able to sit in a room with these hilarious, brilliant, smart people creating this thing was a real gift. So I was giddy. And I didn’t feel under the gun, even though we did 10 pages a day and we had to stop when the sun went down.

ANN DOWD I never felt like we were under the gun, but there was work to do and we were absolutely aware of it.

Ten pages a day sounds like a lot, and it feels like these are long takes.
BIRNEY 20 minutes, sometimes. We would do the pages and stop, and then the next day we’d go back a page, to give us a ramp into the next 10 pages.

ISAAC Sometimes it was 12 pages. I think you undersold us. But necessity is the mother and all that stuff, and it was what we needed. We could have shot it for six months, and instead we shot that conversation in eight days. And this felt bigger than all of us. It was a film about something, you know? It was about forgiveness. We’re dealing with issues of forgiveness and division and hatred and relief and healing, and these are things that people need to hear and talk about and explore through drama.

What was the rehearsal process like?
MARTHA PLIMPTON Of course, we had a very small budget, smaller than small. But Fran and all of us felt that it was important to at least have some rehearsal. I hoped it would be a week, but it was two-and-a-half days. I think we got through the script one time. But I truly think that more than that might have been detrimental to our mental health.

BIRNEY Many people have commented that it must’ve been exhausting to film and to go to this place. But when stuff is this good, it actually nourishes and energizes you. We were spent, but we were also full at the end of the day.

ISAACS You live for the opportunities to tell a story like this. It sounds ridiculous and overblown, but it is true. This is what I’ve chosen to do in my life. And once in a blue moon you get to be part of a story that you think is a reason to be in the storytelling business.

Both couples are drawing from so much history that’s not on the page. Did you work that out between yourselves ahead of time?
DOWD We did not.

BIRNEY Ann and I never talked about it.

DOWD And the reason is we don’t like each other. (Laughs) We just had to keep it to the bare minimum.

BIRNEY (Laughing) It wasn’t like we decided not to talk about it. We just never did.

PLIMPTON If I may, and maybe this is taking liberties, but part of that must have been because your couple had been divorced, whereas Jason and I are still married and still kind of in it. We needed to figure what brought us here. And each of us obviously had very different ideas of that, which turned out to be totally organic and correct, because that’s where the characters are as well. We had to talk about it: Where are they in their marriage? Are they sleeping in the same room? What’s the conversation that made them decide to actually get in the car?

ISAACS And what are the rules for this conversation that the therapist has given them? Of course we couldn’t agree, which was great.

DOWD I’m grateful we didn’t have to go through that, Reed. What I’ve learned over time is how differently two people experience something. If my husband and I told the same story about what happened two weeks ago, I’d be thinking, “That’s revisionist history.” And as actors, our imagination of what they went through may make no sense to each other. I can imagine saying, “Great idea, Reed!” and thinking, “I don’t believe that for a minute.”

BIRNEY I feel like after the movie was over, we actually tried to have one of those conversations.

DOWD Did we? How’d that go? 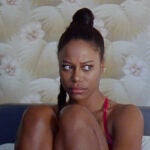 ISAACS One of the things that’s happened with this film, it’s had a wonderful reception but sometimes people categorize it as a film about that (school shooting) incident many years ago. And it’s as much a film about marriage and relationships and what these people are going through today and how they’re going to move forward. It’s entirely about that, not about the incident.

PLIMPTON Well, I would disagree. The circumstances of the film are very important.

DOWD I’ll speak only for Linda: It’s not just that she lost a son, it’s how she lost him. The fact that he took the lives of many and ruined families and that my own son was in such despair that he took his life and I didn’t know about it.

PLIMPTON There’s a reason why Fran wrote this film. It isn’t to just explore human relationships and the possibility of forgiveness. Fran was a new father and Parkland happened. And he had to pull over, as he tells it. He became compelled to really try and explore this struggle that he felt that he could not possibly be able to forgive. And so I think that the event that is the catalyst for this story is essential and it shouldn’t be ignored or glossed over.

ISAACS No, no, no, I didn’t mean to do that. What I meant was in my daily life I’ve talked to addicts and people whose lives are crippled by blame. And these people come into this room with the need to free themselves from the baggage of the blame and hatred they carry. 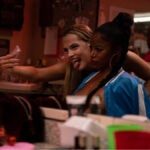 Also Read:
Independent Spirit Awards Nominations Analysis: Voters Had No Choice But to Get Really Independent

DOWD Martha, what you said I think is very good. It’s people realizing not only what they need to do, but what they can do. You go in thinking, is it even possible to put the burden down and forgive? And it happens gradually, gradually.

ISAACS But also, what is it that weighs me down when I get out of bed in the morning? These events are not happening to me now. What am I weighed down by? I’m weighed down by hatred, by blame, by things outside myself. And we have the power to free ourselves. So for me, I don’t think it is a platitude.

PLIMPTON No, not at all. But I think it’s interesting that Ann and I…

ISAACS Let me finish the sentence.

ISAACS I don’t think it’s a platitude to say it’s a film about the need for human contact. These people come and something happens to them, not in the way you would expect. They come wanting something and they all get something.

PLIMPTON I think it’s interesting that the way Ann and I speak about it is slightly different. I think we experience it as a process, and maybe you do too. I’m not trying to put words in your mouth, but I think the way that Ann and I experienced it, having played mothers, is very similar to the way the women experience it in the film. The men are there to get something.

BIRNEY Certainly I am.

PLIMPTON And I think in many ways, Jay is as well.

ISAACS Well, Gail’s the one who comes with a list.

PLIMPTON I think the reason Gail decides she doesn’t want to go is because she knows there’s nothing to do.

PLIMPTON We’re having the same exact discussion we had when we were making the movie.

ISAACS The film literally starts with you saying, “I don’t think I can do it.” If it’s not about the thing you have to do, then what is it?

PLIMPTON You’re arguing with me?

PLIMPTON We’ve already shot the movie! You and I interpreted it differently then, and we still do. That’s all I can say.

BIRNEY Well, we all interpret it individually.

ISAACS Some right and some wrong. (Laughs)

BIRNEY (Quickly) But it was a great, great time.

ISAACS (Nods) Yeah. We would film all day, and then we would stay up all night talking about it, preparing and working through all my arguing, running through the lines and trying to build the life off screen. And you know, some people got some sleep, some people got no sleep and then we were straight back into it. It was a bubble, and something happened during those two weeks that that means we can never get away from each other.