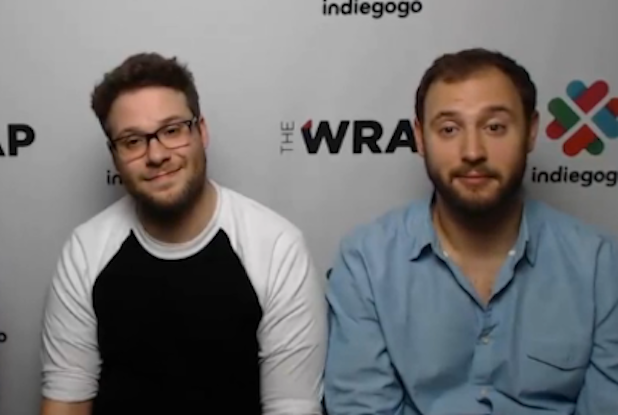 Seth Rogen and Evan Goldberg have never been busier.

The writers of “Pineapple Express” are producing three different movies — including “Neighbors,” which premiered at South by Southwest last weekend. They are developing four different TV pilots, including one with a producer of “Breaking Bad,” and they just finished directing their second movie, “The Interview.”

Is there anything they can’t get made?

“The answer would have been ‘Preacher’ until recently,” Rogen told TheWrap about his favorite graphic novel. “But we’re actually doing that now.”

There is, however, one movie idea that no studio would touch: “Sausage Party.” Rogen and Goldberg have been working on the animated movie for three years, wanting to make the first all-CG, R-rated comedy.

“We thought there would be a bidding war,” Rogen said. “No one wanted to make it. The one thing we were so psyched about was the same thing they all hated.” Now, the film is in production after Megan Ellison, wunderkind financier, stepped in to help get it made. How’d that happen? Rogen and Goldberg made “This Is the End,” their successful directorial debut.

TheWrap spoke with the actors about how “This Is the End” changed their career, working with Zac Efron and the most important movie of their career.

How would you compare “Neighbors” to the other comedies you’ve made?
Rogen: We are always trying to make a movie about people our age, about things we’re personally going through. The concept of making a movie about parents struggling with having kids and struggling to go out was really an appealing idea.

Goldberg: Since we are getting lamer and lamer as time goes on.

Rogen: I realize I’m more likely to be the guy calling the cops on a party than having the party.

Rogen: In this town maybe it’s cool, but in LA it’s not.

For those that haven’t seen it, what’s the premise?
Goldberg: A couple – they are both morons – have a child and a frat moves in next door. They butt heads.

And Rose Byrne plays Seth’s wife.
Rogen: We’re struggling with the fact that we can’t go out and drink anymore. When the frat first moves in, we think it could be cool to hang out with them. It quickly becomes clear it’s not a cool situation.

Zac Efron plays the frat president and his brothers are a bunch of comedians you’ve worked with before – Dave Franco, Chris Mintz-Plasse. How did Zac match up with the rest of you?
Rogen: He’s very experienced; he knows a lot about how movies are made, which is helpful for movies like this. He’s very funny; he’s also a very serious actor. I didn’t know what to expect, but he took the character seriously.

Goldberg: He was hard on himself.

Rogen: He was also very loose and willing to improvise. I’d love to work with him again.

Goldberg: He never did improv like this and he just did it as well as everyone.

How much of this movie is improvised?
Rogen: Quite a bit. It feels tight though. That’s one of the most impressive things when I watch it. It feels very well-constructed. It’s a testament to the editing as much as anything else.

What was the best joke or scene that got left out?
Rogen: In the movie, it’s implied why the frat had to move out of the old house and into the new one. They burned down the old house. We filmed the scene. They are having a civil war reenactment and have lined the pledges in two lines with their asses out. They shoved fireworks in their asses and have a battle with the pledges with fireworks up their asses. An errant firework goes into the house and burns the house down. We cut it for time.

Goldberg: It justifies buying the DVD.

Seth, you know Nick Stoller from “Undeclared.” What makes one of his movies different from the other directors you have worked with?
Rogen: He seemed to make a conscious effort to hold onto nothing he’d done in his other movies. He almost approached this as though it were his first movie. That’s not to say he wasn’t on top of his shit, but he hired a new DP, a new editor, and made it look very different. He did jokes he’d normally be very uncomfortable with.

A lot of people are afraid of working with first-time directors, but this weekend I’ve heard a lot about how people love to work with them because they break rules they don’t know exist.
Rogen: You can do that if you are not a first-time director, too. We just directed our second movie, and we tried to make it look different and feel different. It’s terrifying.

How did directing change the way you approach projects?
Goldberg: It changed everything – the amount we understand about camera work … the editorial process really is the most mind-blowing.

Rogen: Now you know what you need – the pieces needed to make a scene work, shots that might be missing.

Do you think about that while acting?
Rogen: More so when I am directing than acting in a movie someone else is directing. If something is technically wrong, I won’t worry about it. If I am acting and directing, sometimes I’ll just see the camera doing something I know it shouldn’t be doing and it will 100 percent pull me out of a scene.

I feel bad for the other actors because they know they can tell I’m not in it.

What is the movie you just finished?
Goldberg: “The Interview,” with Seth and James Franco.

Rogen: We play two journalists who score an interview with Kim Jong-Un after we hear he’s a fan of our entertainment talk show. The CIA asks us to assassinate him while we’re interviewing him. We agree to attempt to do that.

Did you write it?
Rogen: We came up with this story for it, but we worked with this guy, Dan Sterling.

Goldberg: It’s a little political and we’re not very political.

There is a public fascination with North Korea.
Goldberg: You know why? Because it’s fucking crazy.

Rogen: It’s weird it exists in our world … it just seemed hard for us to creatively ignore it as something very fertile to make a movie about.

You guys have a lot of projects in the works, including “Sausage Party,” an animated comedy I’ve heard great things about.
Rogen: It’s our most important film. [Laughs] We’ve been working on it forever. I don’t think we’ve ever been so passionate about anything, which is ridiculous because it’s about sausages.

Once we came up with the idea of doing a fully CG, Pixar-style R-rated comedy, it just became so entertaining to us. We became obsessed with it. It took years to get someone to make it. Megan Ellison came along and gave us the money to get it going. Now we’ve been recording it.

The cast is unbelievable. I can’t believe all these people we got to be in a movie and play food items in ridiculous, disgusting ways.

Given the popularity of R-rated live action comedies, why has it been so difficult to get raunchy animated movies made?
Goldberg: CG movies cost a lot of money. We had to restructure how to do this financially.

Rogen: Only recently could you technically make an animated movie for this budget. We’re making “Sausage Party” for a similar budget as “Neighbors,” which is cheap on the grand scale of studio comedies. We needed to wait for the technology to get to point where studios would take that risk.

To us, it’s shocking they saw it as such a risk. When we first pitched it, we were told by everyone they didn’t want to buy it.

When was that?
Rogen: 3 years ago. We thought there would be a bidding war. No one wanted to make it. The one thing we were so psyched about was the same thing they all hated.

Where you have worked an awful lot.
Goldberg: We started up with them and Universal. Those are the two studios we have the closest connections with.

Rogen: Donna Langley and Amy Pascal have been very supportive of us. Recently, it’s truly mind-blowing what Amy in particular has let us make.

For the record: A previous version of this story misidentified Rogen and Goldberg as writers on “Knocked Up.” TheWrap regrets the error.