If you think you’d like watching a Metallica concert paired with a gibberish fictional story, then you’ll probably love “Metallica: Through The Never.”

A rhapsodic chronicle of a young roadie’s retrieval of a prized band keepsake filtered through a greatest-hits set, director Nimrod Antal’s performance documentary treats Metallica with predictable reverence, but falls flat trying to create a coherent throughline for its fictional segments. Nevertheless a sweeping, ambitious take on concert films, “Metallica: Through The Never” works well enough visually, and certainly musically, to make up for its feeble attempt to fictionalize the lengths to which a fan would go for his favorite band.

The film opens with a beautiful, continuous shot that sweeps across a vast Canadian cityscape, down past the concert venue (or one of them) where the band is set to perform a sold-out concert, and ends on a close-up of the dinged bumper of a Metallica fan’s car. As a chubby metalhead gets out and exclaims “first to arrive, last to leave,” Antal sets the tone for his musical odyssey, pairing epic, adoring cinematography with affectionately canted fandom.

The next shot introduces Trip, played by Dane DeHaan, who eats pavement while trying to coolly skate his way to work. Unfortunately, the film’s instances of humor are too few and far between, but these moments offer a brief respite from the band’s propulsive dirges, not to mention the post-apocalyptic showdowns that follow. 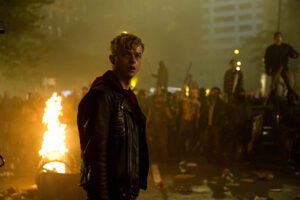 Even if you have mixed feelings about lead singer James Hetfield’s growling delivery, which probably too often sacrifices subtlety for visceral power, Metallica’s best songs dexterously balance structural complexity and anthem-like scope, qualities Antal beautifully highlights via plenty of close-ups of the band members as they perform. Their use of Ennio Morricone’s “The Ecstasy of Gold” as a preamble to their first song – which has served as their intro music since 1983 — speaks to their operatic ambitions, and they completely follow through via a stage setup that allows each member to roam freely in a 360 degree space while oversized props from their classic albums pop up periodically on stage.

Moreover, the acoustics of the venue complement the chugging wall of sound that emerges from their instruments, guaranteeing that theatrical audiences will be able to experience every note with blinding clarity.

Admittedly, I’m not familiar enough with Metallica’s songs to know how many of Trip’s adventures were prophesied – or contextualized here – in their lyrics, but “suburban warfare” and “nightmarish drug trip” seem to be the only subtext of the fictional story, all of which makes it that much more underwhelming. DeHaan’s natural intensity notwithstanding, Trip is barely enough of a character to be described as a cipher, and the urgency of his cross-town task fluctuates wildly according to the demands of each set piece.

The bag he’s sent to retrieve, which evidently contains Marcellus Wallace’s soul, is a classic MacGuffin, important only inasmuch as it propels the plot forward. But its mystery feels like a missed opportunity, first because its contents could provide Trip’s journey with more tangible stakes, and then because a final solution or revelation might have given the film a finale that tied together the two narratives.

In terms of its larger purpose – to obliterate as many of Metallica fans’ eardrums as possible with a big, loud concert — the only time the film stumbles is when it tries to pair the apocalyptic traumas of Trip’s story with on stage “malfunctions” and “accidents” during the band’s performance, such as when a lighting rig explodes, and later, a production assistant catches on fire.

And while Hetfield’s momentary concern over his charred employee and jeopardized stage show is admirable, it feels even less believable than the fictional story, especially when the band pretends to rally for their finale by assembling amps on stage garage-band style, without discernibly changing the sound or volume of their performance. But ultimately, “Metallica: Through The Never” feels like the cinematic equivalent of a fan’s homemade “greatest hits” mix tape, complete with hand-drawn liner notes that don’t quite capture the nuances of their music, but nevertheless adoringly embody its spirit.