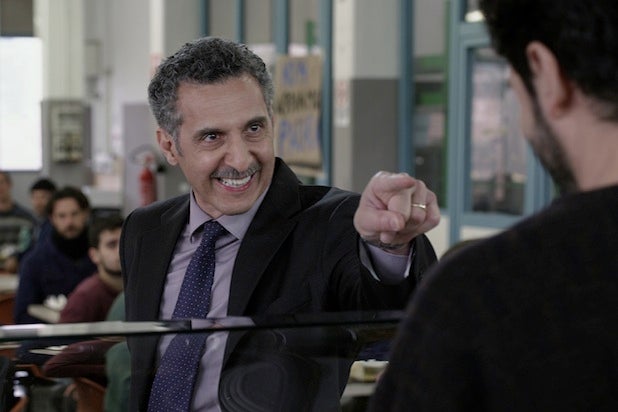 “Mia Madre,” which screened in the main competition at the Cannes Film Festival on Saturday, is the kind of tricky balancing act that can be extremely difficult to pull off — not least because to make a movie like this work, you have to make it look effortless.

But for the most part, that’s that Italian director Nanni Moretti does. “Mia Madre” is partly a comedy, partly a melodrama, partly a social satire and partly a sly takedown of the movie business. And Moretti’s touch is so deft that it all comes together nicely, turning his film into a light but deeply affecting ode to family and creativity.

Of the three Italian directors in the main competition — the others being Matteo Garrone with “Tale of Tales” and Paolo Sorrentino with “Youth” — Moretti is the only one to have previously won the Palme d’Or, which he did for “The Son’s Room” in 2001.

In fact, he’s one of only two directors in the main competition who has previously won the Palme — and the other one, Gus Van Sant, crashed rather loudly in Friday night when his film “The Sea of Trees” was booed at its first screening and eviscerated by critics. (Another former winner, Apichatpong Weerasethakul, is exiled to the Un Certain Regard program this year.)

So the chances of a repeat winner were riding on Moretti on Saturday morning, when “Mia Madre” screened for the first time for Cannes press. And while it may be too light to win the big prize, the film is never less than pleasing, and often quite moving in the way it blurs the lines between personal drama and showbiz comedy.

The film stars the understated but commanding Margherita Buy as Margherita, a movie director who’s working on a socially-conscious film starring an American movie star, played as a blowhard with glee and relish by John Turturro.

But the heart of the film lies in what Margherita does when she’s not telling actors to “play the character, but also stand beside the character” (whatever that means – she’s not even sure herself). Margherita’s mother is dying, so when she’s not on set she’s in the hospital with her brother (played by Moretti himself), trying to cope with the impending loss without unraveling in both her professional and personal lives.

The comedy lightens the drama, the drama enriches the comedy and the movie we’re seeing blends with the movie the character is making and with the dreams she’s having at night; it shouldn’t all hang together, but it does. And in the final stretch of “Mia Madre,” Moretti hits a quiet note of grace that makes his film one of the most satisfying to play the festival so far.

And for the record, the press-screening audience, which the night before had greeted the movie from Moretti’s fellow Palme winner Van Sant with derision, responded instead with enthusiasm.