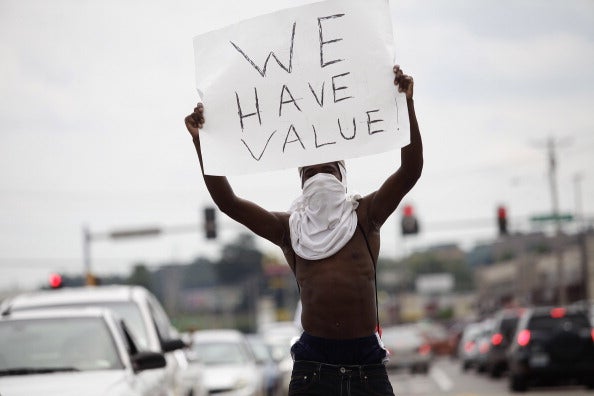 Michael Brown’s family says they are “beyond outraged” that Ferguson, Mo., police would attempt to “blame the victim” by accusing the 18-year-old of taking part in a convenience store theft before an officer shot him.

Thomas Jackson, the police chief of Ferguson, released the name of the officer Friday morning who fatally shot Brown, an unarmed black teenager, on Saturday. At the same time he gave the officer’s name, Jackson released an incident report that accused Brown of stealing cigars from a convenience store and shoving the clerk.

But later Friday, Jackson said the officer who shot Brown, six-year veteran Darren Wilson, had no idea Brown was a robbery suspect at the time he stopped and shot the teenager. Jackson said Brown and a friend were stopped “because they were walking down the middle of the street blocking traffic,” NBC News reported.

Police have said the officer shot Brown because Brown tried to take his gun during an altercation that followed the stop.

Brown’s family objected Friday to the police releasing the robbery report — and surveillance video images from the store — at the same time they addressed the shooting. Demonstrators have spent days demanding the release of the shooter’s name.

On Wednesday, police fired tear gas on demonstrators and reporters. They also arrested more than a dozen people and detained two reporters who did not leave a McDonald’s fast enough for them. Things calmed Thursday after state authorities replaced the local police force who had been covering the protests.

Michael Brown’s family is beyond outraged at the devious way the police chief has chosen to disseminate piece mil information in a manner intended to assassinate the character of their son, following such a brutal assassination of his person in broad daylight.

There is nothing based on the facts that have been placed before us that can justify the execution style murder of their child by this police officer as he held his hands up, which is the universal sign of surrender.

The prolonged release of the officer’s name and then the subsequent alleged information regarding a robbery is the reason why the family and the local community have such distrust for the local law enforcement agencies.

The police strategy of attempting to blame the victim will not divert our attention, from being focused on the autopsy, ballistics report and the trajectory of the bullets that caused Michael’s death and will demonstrate to the world this brutal execution of an unarmed teenager.

Here is the video police released Friday, in which a man they identify as Brown pushes the store clerk: