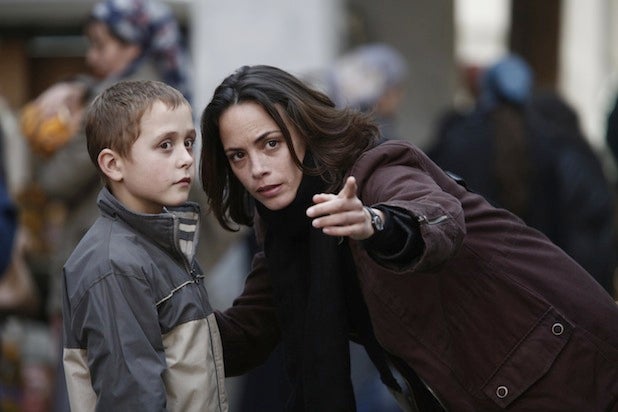 Michel Hazanavicius had a second chance to make a first impression on Monday night in Sarajevo, and he made the most of it.

When Hazanavicius’ ‘The Search” premiered at the Cannes Film Festival in May, it met the peculiar fate of a few Cannes movies each year. In the rush to judgment that follows every major Cannes screening, and in the odd echo chamber that is the Croisette, the fact that some journalists booed at the end of its initial press screening became a de facto condemnation of the film.

“The Search,” an ambitious and sprawling epic about the Russian abuses in Chechnya that wears its heart (and its politics) on its sleeve, was a bold and perhaps foolhardy way for the French director to follow the Oscar-winning “The Artist,” which had enjoyed a sunny reception at Cannes a couple of years earlier.

But lost in the immediate story — “they booed!” — was the fact that the film was greeted with a sustained standing ovation in its public Cannes screening a few hours after the press screening. And overshadowed, perhaps, was the fact that many reviewers found lots to praise in the film.

Also read: ‘The Search’ Takes Michel Hazanavicius From a Silent Movie to a Bloody War

“‘The Search’ is an imperfect film that ultimately succeeds because of the actors, and the director’s unflinching commitment to bring history to the forefront,” wrote Sasha Stone at TheWrap. ” … This is a film not for the critical elite, but rather ticket buyers who might be looking for a little redemption, and a little uplift, and a little beauty amid the torment.”

But after Cannes, Hazanavicius told TheWrap at the Sarajevo Film Festival, he knew that the film needed work. “We had two screenings, and they were the opposite,” he said. “At the press screening some people booed, but that night the regular audience loved it.

“So then you have to think, which is it? Is it a terrible, worthless movie, or is it great?”

The truth, he decided, was somewhere in between.  “We knew there were some things wrong with it after Cannes,” he admitted. “Cannes it so important that it can be a problem — because you have to finish the film when they need you to finish it, not when you think it’s ready.”

So Hazanavicius went back into the editing room over the summer. He trimmed the film by a few minutes, though it’s still close to two-and-a-half hours. He fiddled with the edit that made Berenice Bejo‘s character, a United Nations human-rights advocate who finds herself reluctantly taking in an orphaned Chechen boy, unsympathetic.  And he changed the ending, concluding the film on a tougher, less sentimental note, but one that rings truer to a brutal story.

“It’s a better movie now,” Hazanavicius told TheWrap before the new version premiered at the 20th Sarajevo Film Festival. “I can’t say if it’s a great movie, but it’s definitely a better movie.”

He brought the new version to Sarajevo at the invitation of Bosnian filmmaker Danis Tanovic, who directed the Oscar-winning “No Man’s Land.” And “The Search” definitely benefitted from the unique resonance that many movies acquire when they’re screened in the city that withstood the longest siege of modern times: When you leave a film about conflict and destruction and walk past buildings that still show the scars of a four-year bombardment, you can’t help but hear the terrible echoes of inhumanity.

“The Search” may still have lines that feel too didactic — as the leader of a humanitarian operation, Annette Bening starts there but becomes more affecting as the movie goes along — and it does turn awfully sentimental in between the horrifying moments. But the new version is also undeniably powerful, a drama that swings between the abuses perpetrated in Chechnya, its wrenching aftermath and the process of dehumanization that led there.

Bejo’s character now has a satisfying arc and clearer motivations — “In this version, you understand her more,” the actress told TheWrap — while a young Chechen actor, Abdul-Khalim Mamatsuiev, is heartbreaking as a nine-year-old struggling to make connections after seeing his parents killed and becoming the only caretaker for his baby brother.

And let’s face it: Without at least a little sentimentality, the brutality and inhumanity depicted in the film would be hard to take. “The Search” might be a tearjerker, but it earns many of those tears.

And its director knows his film isn’t an easy sit. “I’m sorry to bring such a sad movie,” he told the audience said at the end of the screening. “And I hope next time I come it’s with a comedy, so we can have some fun.”

The film screened outdoors in Sarajevo, in an open-air theater only steps from the synagogue where screenings were held when the festival launched during wartime two decades ago.

The new version of “The Search” will also screen at the Toronto Film Festival, where Hazanavicius will be looking to secure a U.S. distribution deal.