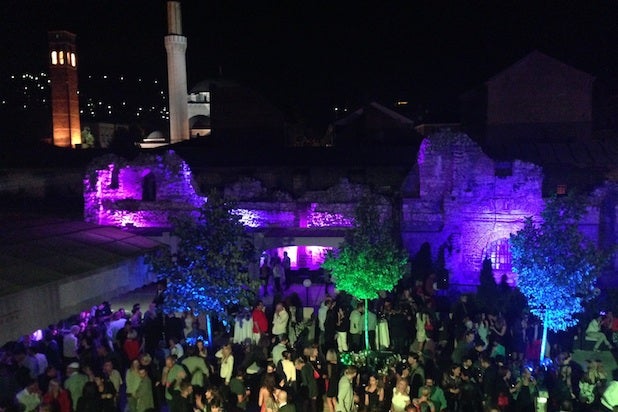 The first Sarajevo Film Festival was unlike any other festival.  Portable generators provided power to the projectors in a city devoid of electricity. Directors Alfonso Cuaron and Leos Carax entered the besieged city by riding in armored cars over the surrounding mountains and then carrying their film canisters through a tunnel dug beneath the airport. With no usable currency, organizers asked moviegoers to donate a cigarette in exchange for a ticket to any of the 37 films.

And now, two decades after its beginning in the four-year siege of Sarajevo during the Bosnian War of Independence, the festival is back for the 20th time. It has grown from those modest wartime beginnings to become an annual celebration that attracts more than 100,000 viewers and thousands of filmmakers, buyers and sellers. SFF this year spotlights nearly 250 films spotlights from 68 countries, with a particular focus on cinema from the Balkans.

But even as the 20th edition kicked off in a blaze of celebration that festival director  Mirsad Purivatra hoped would move it to a new level of international recognition and cooperation — a celebration complete with fireworks, speeches and disco music at an opening-night party where people danced to James Brown and Fat Boy Slim in the shadow of minarets and next to a 16th-century inn (photo above) — nobody tried to ignore its roots in a time of destruction and death.

The festival launched in 1995 as an act of defiance – a way of using art to insist that the war that had split the country along ethnic lines, ravaged the region and placed Sarajevo under constant bombardment and sniper fire could not kill its culture. The Serb military may have been encamped outside of town, from which they had assailed the city since early 1992 – but while they could blockade supplies, they could not stop filmgoers from showing up to see movies.

“For the first six months of the war, to survive physically was the main goal,” said Purivatra, a theater producer in pre-war Yugoslavia, which splintered after the fall of communism. “After six months, we started to think about how to survive mentally, and film was the way.

“During the war, there was no communication. You never knew who left the city, who stayed, who was killed. Coming together to see movies became the main cultural event in Sarajevo.”

The first festival grew out of two years of once-a-week screenings in a basement, with Purivatra and the other organizers relocating the screenings to a Jewish synagogue that could accommodate 800 people (or 900 children, for a memorable showing of Cuaron’s “A Little Princess”). People were so hungry to speak to filmmakers, and to foreigners, that post-screening Q&A stretched as long as three hours.

The second festival ended on the day the Dayton Accords formally brought the war to an end — and that, Purivata told TheWrap, was when festival organizers began to formulate goals beyond simply being able to show movies in a war-torn city. “We had a vision the first year,” he said. “But after the war ended, we said, ‘Let’s now work on creating a real festival.'”

The war is almost two decades gone, and the festival has just launched a film fund and is looking for international partners. But in Sarajevo, the conflict is also immediate – in the scars that the city’s buildings still carry, in the minds of its people and in the films that screen at its festival.

It’s not hard, for example, to find locals bemoaning the fact that the cinema of the region dwells on the war and its aftermath.  “I don’t know if the people will ever recover,” said one staffer, “and you see that in the movies.”

At the festival, you also see the reverberations of war in films from other countries: in “Cure — The Life of Another” from Croatia, “Three Windows and a Hanging” from Kosovo, “Macondo” from Chechnya, “Maidan” from the Ukraine. (This is not a festival that lets you escape thoughts of  Ukraine to the northeast, or Gaza to the southeast.)

Certainly, the fare is not all grim, with the lineup also including the Richard Linklater‘s “Boyhood,” Woody Allen‘s “Magic in the Moonlight,” the Polish Oscar entry “Ida” and the Cannes titles “Leviathan,” “Winter Sleep” and “White God,” among others.

Also read: 10 People, Places and Things to Remember From the Cannes Film Festival

The opening-night film, “Bridges of Sarajevo,” dealt with the war and with many other aspects of life in the city, including a look back 100 years to when World War I was sparked by the assassination of Archduke Ferdinand on a small street only a few blocks from festival headquarters.

It is the work of 13 different directors from around Europe, all attempting to come to terms with the city – which, in the case of more than half of them, means the war. As an anthology, it is typically uneven, but its best moments are small, personal and wrenching: a son who loses the single library book his father was able to save before the National Library was bombed in Marc Recha’s episode; the ambulance driver who dreams about buckets of heads in Aida Begic’s film; the soccer-playing kid who finds refuge in a graveyard in Ursula Meier’s concluding chapter.

Jean-Luc Godard’s entry, by contrast, was typically abstract, with occasionally violent imagery emblazoned with large titles like “ECCE HOMO” and “ACCESS DENIED,” and with statements like “the rule for cultural Europe is to organize the death of the art of living.”

Godard’s entry came a little less than halfway through the 13-part film, which afterwards grew tighter, more potent and more focused on the war, through strong work from the likes of Sergey Loznitsa, Cristi Puiu and Teresa Villaverde.  “The best that we could offer to Sarajevo,” said artistic director Jean-Michel Frodon afterwards, “was the personal vision of artists from all around Europe.”

The audience included actor/director Gael Garcia Bernal, director Michel Hazanavicius and actress Berenice Bejo, jury president Bela Tarr, director Mike Leigh and designer Agnes B., who received the Honorary Heart of Sarajevo, an award she designed during the siege. (The honor puts her in a company with art director and Academy Award statuette designer Cedric Gibbons, among others, as artists who have won the award they’ve designed.)

Jurors who hadn’t arrived in time for the opening-night festivities included actress Melissa Leo, while former Academy president Hawk Koch was among the other guests arriving later in the week.

Agnes B. had been to the festival and to Bosnia many times before, while Bernal, Tarr, Leigh and others are also repeat visitors.

But even for those with only a passing knowledge of the country and its trials, the evening packed an emotional punch. I had been to Bosnia once before, in 1996 – not for the film festival, but to accompany a rock ‘n’ roll band, the Gin Blossoms, who were performing a USO show for American troops stationed in Tuzla as part of NATO’s Implementation Force.

But in Tuzla in 1996, our party didn’t get any closer to the people of Bosnia than to fly overhead in Black Hawks surveying bombed buildings on our way from one military base to another. The USO show itself – a surreal experience that included the San Francisco 49er cheerleaders and the most heavily-armed mosh pit I’ve ever seen – was for the troops, not the locals.

The film festival, for all the international visitors it courts and attracts, is different: It’s a party for the city, one that sees its streets turn as crowded and festive as they ever get.

(Too crowded, sometimes: “The festival is bigger than the city,” admitted Purivatra. “We don’t have the infrastructure to support it yet.”)

Yet the scars of war are still clear — on the streets where the “Sarajevo rose” has been painted anywhere bombs landed and killed more than three people; in the occasional buildings that sustained damage and were never rebuilt; in the bullet holes that still pockmark some structures; in the alleys of antique dealers who’ve fashioned vases, keychains, pens and a variety of other objects out of shell casings.

And the scars, perhaps, are visible most of all in the art, in the films that form the heart of a festival born in defiance but bound by both tragedy and triumph.

But, insisted Purivatra, those scars are fading.

“In a way, the war is always present,” he said. “But more and more, our filmmakers are beginning to speak of post-war stories.

“Remember, socialism died 20 years ago, but then the war came and we never had a chance to make a transition to democracy. We still have so many untold stories from the war, from the post-war times, and from the unstable situation we’re still in.

“And now, I think, is a turning point, for our film and for the festival.”