Iger wrapped up his testimony before the lunchbreak Wednesday and has left the building. The remainder of his testimony was much like the beginning — straightforward, savvy and corporate.

If ever a man looked like he didn’t need to phone a friend to get his final answer, it was Disney CEO Bob Iger on the stand Wednesday morning at the “Who Wants to Be a Millionaire” trial in Riverside.

Deftly avoiding any slips of the tongue and giving no quarter, Iger detailed what he knew about how “Millionaire” came to be on ABC, what he didn’t know, to whom he spoke and what “details” of meetings “some 11 years later” he did not recall. 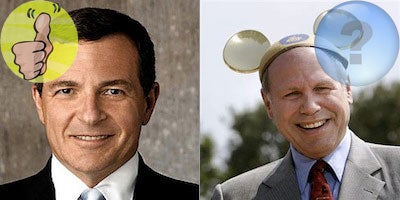 It was a consistent corporate performance that Michael Eisner could only have hoped to emulate – though it’s unlikely now that the former Disney CEO will have that chance. Eisner is out of the country and won’t make it back in time to testify, according to what his representatives told Celador International lawyer Roman Silberfeld late Tuesday evening.

That leaves Iger as the biggest fish Celador will have in the witness box for its $270 million claim against Disney and its TV partners.

Celador alleges in the case, first filed in 2004, that it was denied significant revenue and profits from “Millionaire” by a series of secret arrangements, shell-game accounting and sweetheart heart deals concocted by ABC and fellow Disney subsidiaries Buena Vista Television and Valleycrest Productions when the British hit was brought to the U.S. in the late 1990s.

In that context, Iger, when asked if he set standards of corporate and business conduct for all Disney “team members,” as they are called, knew exactly what he was agreeing to when he emphatically asserted “I do.”

Dressed in the corporate armor of streamlined spectacles, blue blazer, blue tie, and gray slacks – with an iPad for a sidearm and various Disney underlings in tow – Iger’s aura of authority was obvious as took the stand around 9:40AM and stated his credentials and pedigree. Lead through his career history and corporate best ethical practices by Silberfeld, Iger displayed none of the hesitancy, foggy memory or flabby glibness of past witnesses.

“The concept was described and pitched to me by an executive from ABC, Michael Davies,” Iger said when asked when he first heard about “Millionaire.” Davies, in videotaped deposition from 2006 played for the jury last week, detailed executive meetings in late 1998 and early 1999 in which he enthusiastically informed both Eisner and Iger, then respectively Disney CEO and the then head of ABC Inc., of how impressed he had been with the original UK version “Millionaire.” Laying out the corporate hierarchy in action, Davies also stressed how vital the direct approval of Eisner, which Iger was clearly aware of, was to spurring on the effort to acquire an American version.

It was a point of view that Iger said in court Wednesday that he basically shared.

“I thought it would have a positive impact on ABC.”

While not as intimately involved as then-William Morris agents Ben Silverman and Greg Lipstone, both of whom have been in the witness box already, in getting the show to America, Iger and the fortunes of “Millionaire” have always been connected as the debut and astounding rise of the show mapped the former ABC executive’s rapid ascent at Disney.

“I gave the collective group encouragement about putting the program on the air,” Iger told the court. Later in his testimony, Iger, who spent much of his time on the stand sketching out the business of running a network, anticipated what is one of the pillars of Celador’s case and added, “I don’t remember if we discussed when the rights were acquired.”

Again and again on the stand, Iger, even when his memory was jogged by emails and documents from the time after he admitted to not remembering specifics from the debut of “Millionaire” in America in 1999, spoke to the court succinctly and surely of the game show that catapulted ABC from third place to No. 1 among the networks.

“’Very positive’ is a better way to put it than ‘extraordinary,’” Iger deadpanned when discussing the ratings results of “Millionaire” when it debuted in Aug. 1999. “It had been almost four years since ABC had won a week in primetime.”

Iger’s testimony is expected to last until the early afternoon. The plaintiffs anticipate resting their case later this week, with the defense to start immediately afterwards. The trial is scheduled to conclude its evidence portion on June 29, with the jury then to enter into deliberations.

Bob Iger arrived in court on Wednesday morning with all the accoutrement one would expect of a media mogul: blue blazer, blue tie, gray slacks, iPad.

The Walt Disney Co. CEO came to Riverside to testify in the Celador vs. Disney trial (see below), but his predecessor, Michael Eisner, was looking less and less likely to do the same — lawyers now say he's out of the country until mid-July, and indicated they could probably get along without him.

Meanwhile, Iger's iPad was equally useless as the Riverside courtroom, reliably wired for Internet access throughout first two weeks of the trial, had suddenly lost its wi-fi connection.

Bob Iger takes the stand first thing Wednesday morning in the $270 million trial over payments for “Who Wants to Be a Millionaire,” but the Disney CEO’s predecessor, Michael Eisner, is still iffy.

Eisner was expected in Riverside this week sometime after Iger’s testimony – giving the Celador vs. Disney trial a 1-2 mogul punch – but a complication arose Tuesday. Eisner is out of the country and won’t be back before July 10, long after the judge’s June 29 target for the case to go to the jury.

To buy time, the judge indicated that plaintiffs could suspend their case and let the defense take its turn. They could also mutually decide that Eisner’s testimony is immaterial.

That’s hard to imagine, given that Eisner was in charge when Disney suddenly got hot for the idea of a British hit game show translated for ABC. Celador International, which created the show and was just as eager to export it to the U.S., claims that Disney, ABC and it’s TV family of companies worked closely with William Morris Agency to bilk it out of millions in revenues through sweetheart deals and backroom doings.

Both Disney generalissimos are at the heart of an affair that goes to the very heart of the way Disney conducts business. And in-the-know heavyweights Eisner and Iger can offer, in a case full of foggy memories such as that of former William Morris agent Ben Silverman,  a perspective on what the company’s intent and direction was in gaining the North American rights to “Millionaire.”

And in a civil case based on a preponderance of evidence rather than proof beyond a reasonable doubt, both the former and the current Disney CEO have great weight in determining for the jury who knew what — and how things really worked. Passing the buck, from either the past boss or the present boss, would not bode well for Disney and its companies who already smell bad enough from the whole affair.

It’s not just the former CEO’s prestige and notoriety that is of value, though no one would dispute that Eisner has the biggest marquee value here in Riverside, even if Iger holds the power in Burbank. Eisner is a vital witness, as former ABC Exec VP Alternative Series and Specials Michael Davies asserted in his 2006 videotaped deposition played for the jury on June 8 and 9, because his direct nod in favor of “Millionaire” spurred on Disney’s pursuit and acquisition of the property.

Directly naming Eisner and Iger (who was head of ABC Inc. at the time), Davies spoke of meetings in which he informed both of “Millionaire’s” potential soon after he himself first saw the original UK version.

During this time, Iger went from being the President of ABC Inc, which Disney had purchased in 1996, to the president of Walt Disney International in Feb. 1999. This was just over six months after “Millionaire” debuted in the UK on Sept. 4, 1998. In Jan. 2000, just over six months after “Millionaire” had debuted on ABC and was proving a ratings superpower, Iger was promoted again — this time to Disney President and COO, where he remained until Eisner left the company in 2005.

If Davies was pushing the property, Iger was in the critical position of having “Millionaire” as the first big hit of his rapid ascent. Iger is expected to offer insight into ABC’s procurement of “Millionaire” and the boardroom politics at Disney and ABC at the time.

But ultimately it was Eisner, according to Davies, who breathed life into what was then an uncommon notion: put a game show on primetime TV.

Specifically, Davies recalled how he enthusiastically passed a tape of the UK version of the show “across the table” to Eisner, who ran Disney from 1984 to 2005, at one 1998 executive meeting. That afternoon or the “very next day,” according to Davies, Eisner sent him an email indicating that he liked the show much more than he thought he would.

“That email was the most significant thing,” Davies said in his Sept 12, 2006 videotaped deposition, “that was it!”

According to Davies, everything picked up momentum from that point. In his testimony, Davies, who started working the phones and the angles back to the U.K. with renewed haste and vigor, said Eisner’s involvement started an urgent push to get the show on the air on ABC by 1999. After all, nobody wants to be the one to tell the boss he can’t have what he likes.