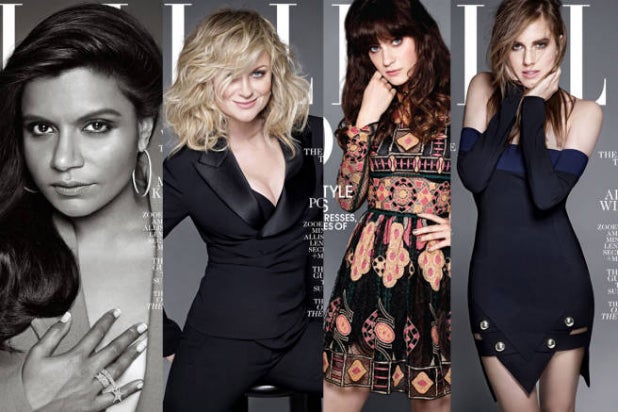 “Mindy looks sexy, beautiful and chic,” Elle said in a statement to TheWrap. “We think it is a striking and sophisticated cover and are thrilled to celebrate her in our Women in TV Issue.”

But others noted how the photo of Kaling – who is the lone woman of color among the group and a self proclaimed “size 8” – was the only one in black and white and the only one cropped to her head and neck, while the others are full body, full color shots. Feminist blog Jezebel called this another example of “institutionalized inequality.”

While Jezebel admitted Kaling’s cover is “practically oozing with glamour” and doesn’t make Kaling look bad, others were far less forgiving with their criticism.

“The fact that Kaling is a woman of color and a woman whose size defies the conventions for actresses are two traits that should never be stripped from her when slender, white women are allowed to keep their whiteness and bodies,” Julia Sonenshein wrote on The Gloss.

“…Elle pulls shit like this, and it perpetuates the idea that Kaling is different in the sense that different is less than. Why did Poehler, Deschanel, and Williams have full color covers showing their figures while Kaling literally was stripped of her body and color? Because somebody thought that diluting Kaling’s image would make it more palatable, and that’s as clear a message as we’ll get.”

Also read: Mindy Kaling: There’s No Debate About Whether Women Are Funny

For her part, Kaling tweeted that she loved the cover and took the opportunity to plug a new episode of her Fox show, “The Mindy Project.”

Wishing for more skin on my @ELLEmagazine cover? Chris Messina & I are naked on a brand new #themindyproject tonight, ya pervs! 930/830 FOX

I love my @ELLEmagazine cover. It made me feel glamorous & cool. And if anyone wants to see more of my body, go on thirteen dates with me.

This is not the first time Elle has come under fire for its photo choices when featuring women who are not model-skinny on its covers.

In November’s “Women in Hollywood” cover series, critics accused the magazine of hiding actress Melissa McCarthy‘s full figure in an oversized coat. (McCarthy later revealed she chose the coat and, like Kaling, loved her cover photo.)