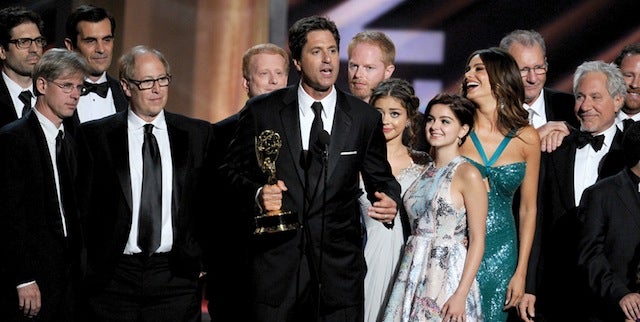 “There’s a lot of pressure in everything we do to be funny,” “Modern Family” co-creator Steve Levitan told TheWrap two years and 10 Emmys ago. “So when you get up there [to make an acceptance speech], you better make them laugh or they’ll go, ‘You know, he’s not that funny.'”

Levitan and his show have done pretty well on that count. Here are a few of the”Modern Family’s” Emmy-acceptance moments:

Steve Levitan, Outstanding Comedy Series, 2011: “Last season we were on vacation and a gay couple came up to us and said, ‘You know, you’re not just making people laugh, you’re making them more tolerant.’ And I thought to myself, they’re right. We are showing the world that there’s absolutely nothing wrong with a loving, committed relationship between an old man and a hot young woman. And looking around this room tonight, I see many of you agree.” Ty Burrell, Outstanding Supporting Actor in a Comedy Series, 2011: “I actually got kind of a late start in acting, and my dad passed away before he ever saw me perform. And I can’t help but wonder what he would think about all of this … If he were here tonight, I think he would say, ‘But why the makeup?'”

Julie Bowen, Outstanding Supporting Actress in a Comedy Series, 2011: “Are you kidding me? I don’t know what I’m going to talk about in therapy next week now …Thanks to Steve Levitan and Chris Lloyd for having complicated wives and complicated lives and finding them funny enough to write about.”

Levitan, Outstanding Comedy Series, 2012: “We were outside shooting on Friday when the Space Shuttle Endeavor flew over our set, and everyone stopped. And at that moment, suddenly we weren’t big important people making television anymore. Because it was super loud and our sound guy said we couldn’t.”

Eric Stonestreet, Outstanding Supporting Actor in a Comedy Series, 2012: “I never knew I’d be on TV as a gay man, but I love the pictures of hairy chests that you guys are sending me. It’s really amazing. Thank you for those.”

Levitan, Outstanding Writing for a Comedy Series, 2010: “A big thanks to our wives, without whom … well, we’d probably be dating around a lot. I mean, I just won an Emmy. That’s a pretty good opening line, I think.”

Bowen, Outstanding Supporting Actress in a Comedy Series, 2012: “My job really amounts to me falling down and making faces while wearing lipstick and nipple covers. And the fact that that could be translated at any time into an award or something artful is really a testament to the people that hired me …To the people that edit around me with great regularity and make it look like I have a clue what I’m doing. To our writers who write things much better than ‘nipple covers.’ To the censors at ABC who insist upon nipple covers.”

Stonestreet, Outstanding Supporting Actor in a Comedy Series, 2010: “I’m just happy I haven’t gotten anything on my shirt yet.”

Jeffrey Richman, Outstanding Writing for a Comedy Series, 2011: “There are nine other writers on our staff who could easily be standing up here tonight instead of us. At least that’s what they keep saying.”

Levitan, Outstanding Comedy Series, 2010: “I want to thank our incredible writing staff. Chris and I get so much credit for what is often their amazing work, and I just want to say, ‘That’s Hollywood, dude.'”