As portrayed by Jared Leto, Morbius is a brilliant doctor who turns to the dark side after experimenting with bat DNA to cure a crippling genetic disorder. (You know, that old story.) After inadvertently becoming a creature of the night, he’s also forced to take down his surrogate brother, who has also taken the serum but become more Patrick Bateman than Peter Parker. (“Morbius” is set in Sony’s Spider-Man-adjacent cinematic universe.) Of course, even a Marvel-ish movie has to have some mid- and post-credits scenes and that is very much the case with “Morbius.”

Get ready as we breakdown everything that happens after the lovely, neon-tinged credits roll.

Major “Morbius” spoilers follow, but know that the credits sequences are pretty separate from the actual movie. 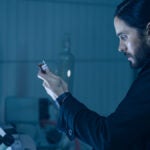 The first scene happens right after a title card for the movie. We see the sky cracking apart and the glittery purple stuff behind it start to glow. This is clearly the end of “Spider-Man: No Way Home,” when the multiverse starts intruding into our world like a sock that somebody has left in the communal dryer you are now using.

Apparently Adrian Toomes aka the Vulture (played by Michael Keaton) from the Tom Holland Spider-Man universe has been zapped into the “Morbius” universe (which, it has previously been established, is the same universe where “Venom” takes place). Now, why somebody from Holland’s world is getting zapped into this world remains unclear; the spell that Doctor Strange (Benedict Cumberbatch) cast in “Spider-Man: No Way Home” meant that the people who knew that Peter Parker was Spider-Man could infringe on their universe. After his spell was cast it doesn’t make much sense that characters who were still in the Holland universe would now be cast out to other universes.

Anyway, Toomes shows up in prison, since he was in prison in Holland’s universe, but nobody knows who he his. Apparently his appearance is enough to warrant coverage on the news. As if America’s prison system wasn’t horribly broken and it would probably take a decade for anybody to actually notice a new face in the yellow jumpsuit.

Making things even more confusing is that much of the marketing material for “Morbius” featured Keaton playing the Vulture in a completely different scene. (For those of you who have seen the movie, it would have taken place when Morbius was stealing blood. Toomes was dressed as a medic.)

When TheWrap asked director Daniel Espinosa about the different scenes, he said: “As a filmmaker, you feel many different things, and what you feel is theories or ideas. And then during the editorial process, you take out ideas, and you distill your potion to some kind of purity now. I think that in my distillation, that part [is gone].” 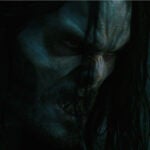 The second scene, which happens after the main credits sequence (none of these are technically post-credits but hey), sees Dr. Michael Morbius speeding along a desert road in a very fancy sports car. (The scene recalls both Iron Man and Dr. Strange.) He stops the car. His long hair blowing in the desert breeze.

We hear noises and see lights; a man in a flying vehicle approaches him. It’s the Vulture. And his suit is similar to the one that Keaton wore in “Spider-Man: Homecoming” but it’s not exactly the same. He’s made some modifications. The Vulture (he never takes off his helmet, so this scene was clearly shot without the involvement of Keaton, besides recording a few lines) tells him that he’s thinking about putting a team together; maybe they can do some good in this world.

This is obviously a reference to the Sinister Six, a coalition of Spider-Man villains that unite to come after the friendly neighborhood wallcrawler. There was an attempt at a “Sinister Six” movie during the Andrew Garfield “Amazing” era, which was to be written and directed by “Cabin in the WOods” filmmaker Drew Goddard. Obviously those movies imploded and his “Sinister Six” was quietly canceled.

Still, Sony keeps greenlighting Spider-Man villain movies. Not only is there “Venom” and its sequel and now “Morbius,” but J.C. Chandor is directing Aaron Taylor-Johnson in “Kraven the Hunter” (out in January 2023) and Dakota Johnson recently signed on for “Madame Web” alongside “Euphoria” breakout Sydney Sweeney. Even if you’re not great at math, you could get to six pretty quickly. 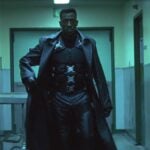 When TheWrap spoke with Espinosa about the possibility that the post-credits sequences establish, he was, like “Morbius,” intrigued. “I think that the world that they’re introducing — they’re doing’ Kraven’ now — sounds super exciting. I must say, I’ve always liked Kraven. I think that they could really make it fun,” Espinosa said. “I think they’re going to make it an interesting universe, with all these characters.”

Espinosa continued: “I don’t know what they will be, but I think as a comic book fan, my thing with Marvel was always that it was like a high school yard, and I could go and find my peers; the people that I like. That would be like the goth-y nerds, or the preppy athletic assholes, or like whatever it would be. I think that’s what the movies should be in a way. I love ‘Logan,’ which is much more kind of mature experience. And I love ‘Guardians of the Galaxy,’ that is like if Spielberg had become 28 again and done a superhero movie. I like this spreading about these ideas of what these comic book movies can be, and still coexist in the same space somehow.”

“Morbius” is in theaters now.