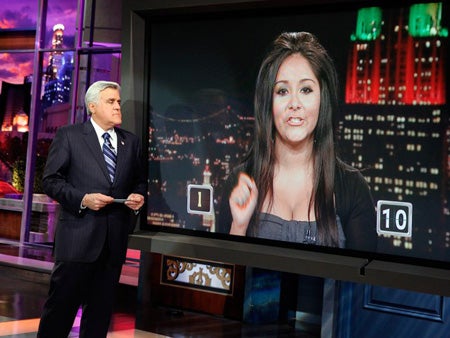 Here’s the Situation for NBC: America is more concerned with Snooki than Leno. At least they were on Thursday.

It’s not the best comparison, of course, but it doesn’t bode well for Leno’s eventual return to 11:35 p.m., especially among the coveted youth demographic.

As TVMoJoe pointed out over the weekend, Conan O’Brien’s finale on Friday “brought in more young adults than any entertainment show on NBC’s primetime lineup this week, and any single broadcast on any network during the past two days.” They won’t get that kind of youth vote for Leno, you can be sure of that.

Then again, in the war for late night ratings, it may all ultimately mean nothing: the audience has been shrinking for years.

Late Night: A Lot of Drama, a Shrinking Audience

New Jersey Lawmakers — Like ‘Jersey Shore’ — Nothing But Bunch of Cash, Fame-Seeking ‘Guidos’