Here’s a fun bit of symmetry: Of the four French titles competing for this year’s Palme d’Or, the first to screen was “Brother and Sister” and the last was “Mother and Son.” (Presumably daughters and grandparents will get their due next year.) Of the two, “Mother and Son” director Léonor Serraille bests her colleague Arnaud Desplechin in the family-saga sweepstakes, delivering a decade-spanning immigration drama that plays on the most intimate of registers.

The film closed out the Cannes competition on Friday, providing it an auspicious berth. This year’s jury will go into deliberations with actress Annabelle Lengronne fresh in mind; should the actress win, she won’t have far to travel.

She isn’t entirely the lead, as the triptych follows a Franco-Ivorian family in chapters dedicated to each member. We open in 1989 on Rose (Lengronne), a young mother of four who leaves her two oldest children behind when she and her two other sons resettle in France. Finding lodging in her cousins’ already cramped apartment and landing work as a maid in a downmarket hotel, Rose instills in her two boys the immigrant ethos: Work hard, work even harder, keep your head down and assimilate. 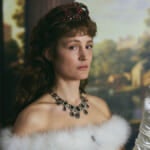 “Mother and Sons,” at least in chapter one, has less interest in wider social drama than in the characters’ inner worlds. Already twice married (once widowed, once divorced) by the time we meet her, Rose lives in a constant process of starting anew. The consequences of such a life upheaval are somehow dimmed for a young woman who shares much in common the protagonist of Serraille’s previous film, “Jeune Femme.” Both live on their own terms, following whims and intuitions wherever they may go.

For Rose, that means rejecting the suitor (with the improbable name of Julius Caesar) that her family suggests to instead strike up flings with men who catch her fancy, though she always has time for her kids. A standout scene finds the mother and sons painting each other’s faces on their shared bed. Nothing really happens, and that’s what makes the scene soar, as the filmmaker and actors show with a casual and natural affection, opening a window onto the most banal and most meaningful moments in parenting.

That bond has already severed once we jump ahead a decade and shift the focus to older son Jean (played in this incarnation by Stéphane Bak). Now based in the Normandy capital of Rouen, the teenage Jean mostly shares his larger-if-hardly-luxurious apartment with his younger brother, while Rose commutes back and forth from Paris. But a new sense of freedom and lack of adult oversight is not the right recipe for this – or really any – adolescent boy. Without any one inciting incident, but with no one there to stop it, Jean’s starts to unravel. 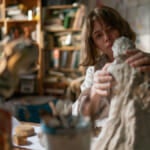 Here too, Serraille’s interest is more tactile than didactic, allowing the story to follow its inevitable course while stopping to take note of small details like three ladybugs that crawl across a young girlfriend’s midriff while she and Jean get frisky in the grass. Later, newscasters may speak about restrictive new immigration policies in the background, but Jean has more immediate preoccupations.

While a clear and intentional outgrowth of its very structure, “Mother and Son” grows colder and less visceral as the family bonds fray, especially by the time we land on youngest son Ernest (now an adult played by Ahmed Sylla) in the third part. With the family’s cramped kitchen now empty, there’s room at the table for some Big Messages to pull up a seat. They come in the guise of two police goons, there to harass the full citizen Ernest -– who has become a high school philosophy teacher, of all things. How much more assimilating can this man do?

Blunter than any other aspect of the film, scenes from this closing chapter do remind the audience of what certain sacrifices can yield and what remains off-limits, especially once characters from the past turn up again, weathered by time and circumstance. This more arid act does serve the larger purpose as it adds a somber underline to those moments of grace we give up to time.