It’s no secret that the star of the new Disney+ Marvel series “Ms. Marvel” — Kamala Khan played by Iman Vellani — is poised to appear in the upcoming “Captain Marvel” sequel “The Marvels.” But the “Ms. Marvel” finale credits scene teased Khan’s involvement in “Captain Marvel 2” in a big and perhaps surprising way.

As is customary for Marvel TV shows, the finale credits scene appears midway through the full credits, and begins with Khan laying on her bed in her Ms. Marvel uniform, now confident as a superhero (and perhaps also a mutant). But her bangles begin to buzz, and when she stands up to investigate, some kind of force blows her into her closet.

When she reappears, she’s not Kamala. She’s Captain Marvel, as played by Brie Larson. Captain Marvel looks around the room to see posters and pictures of herself everywhere, looks incredibly concerned, and says “No, no, no” before running off camera. End credits. 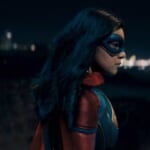 So, what does this mean? Well, it certainly looks like Captain Marvel and Ms. Marvel have swapped places, and knowing just how powerful and universal Captain Marvel is, Larson’s character was no doubt in the middle of some incredibly dangerous battle.

It’s possible, then, that the plot of “The Marvels” – or at least part of the plot – finds Captain Marvel suddenly transported back to Earth, needing to find her way back to wherever she came from to help rescue Ms. Marvel. As for Khan, who knows what kind of trouble she’s gotten into now – although the six-episode Disney+ series proved that she can more than hold her own.

Larson was expected to appear in “Ms. Marvel” in some capacity given Khan’s involvement in “The Marvels,” but it was nice to see her cameo held until the finale credits scene. And who knows, perhaps this credits scene is actually just a full scene from “The Marvels” (as the MCU has frequently done before).

Carol Danvers and Kamala Khan will be joined by Teyonah Parris’ Monica Rambeau in the film, who made her first appearance in the Disney+ series “WandaVision” as a S.W.O.R.D. agent and who is the daughter of Carol’s best friend Maria Rambeau, played by Lashana Lynch in the first “Captain Marvel” movie. 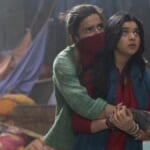