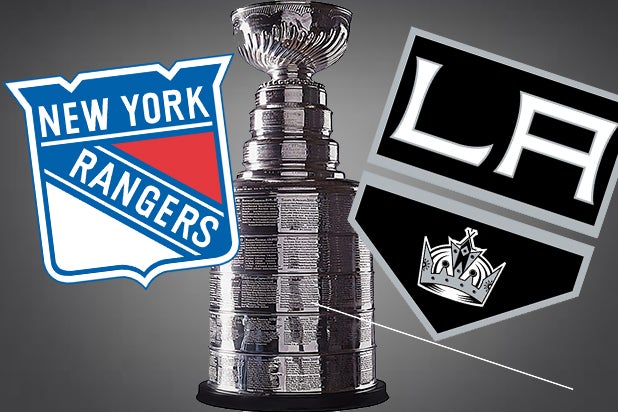 The NHL Stanley Cup Finals feature the teams from the No. 1 and No. 2 television markets in the United States — New York and Los Angeles — but that doesn’t mean it’s a dream matchup for NBC Sports, which has exclusive national TV rights for the championship series.

The Finals, which puck-drop on Wednesday, actually feature the first New York-L.A. championship game in the four major sports since 1981 — but it still might not top last season’s Cup, which featured passionate hockey towns Boston and Chicago.

Those two cities are seventh and third television markets, but produced the most-watched Stanley Cup finals ever in 2013: averaging 5.8 million viewers during each of the six games.

New York scores for hockey, but Los Angeles is still growing its fan base. In 2012, the L.A. Kings topped the across-the-river New Jersey Devils in the Stanley Cup, pulling in just three million viewers. The New York Rangers — and hopefully a competitive series — should top that mark. The Kings are favored to win again this year.

Plus, it could be much worse for NBC and NBC Sports. A smaller market team — a la the Tampa Bay Lightning — would be bad news, while a huge team north of the border — such as the Montreal Canadians, who the Rangers topped 4-2 to get in — would waste away a lot of U.S. advertising.

NBC Sports estimated for TheWrap that the loss of a local market could dip the national rating by five to 25 percent — a fortunate non issue this postseason.

Still, NBC Sports President of Programming Jon Miller diplomatically told TheWrap: “We’re not in the business of preferring anybody. We want good games.”

The first two games of the 2014 Stanley Cup will be on NBC, the middle two on NBC Sports Network, and the rest back on the broadcast channel.

NBC, the broadcast network, does 10-12 regular season games, including the popular outdoor Winter Classic, which Miller is credited with co-creating. But NBCSN is “the home of the NHL, period,” Miller told TheWrap.

Of course, ratings are going to be slightly higher on NBC itself, but it’s the cable channel that really pays the bills through carriage fees.

And the cable net is on a roll: Sunday’s Kings-Blackhawks Game 7 was the most-watched non-Stanley Cup game ever on NBCSN, with an average of 4.1 million viewers.

Highlighted by the Cup, this is a particularly busy week for NBC Sports. They have the French Open Women’s Finals Saturday morning, which will be hurt by a lack of Americans — notably the Williams sisters — and the Belmont Stakes in the afternoon.

With horse California Chrome competing for the Triple Crown, Miller predicts that NBC may draw 15 or 16 million viewers, a coup for the broadcast channel.