Netflix stock got off to a rough start on Tuesday, but the cloudy morning had cleared up by afternoon.

Shares of NFLX just closed up overall on the day, thanks to a deal with Comcast’s X1 service rallying the streaming company’s valuation. News of the seemingly unlikely agreement broke around Noon ET, which is exactly when Netflix stock jumped up more than five bucks per share.

Earlier, stock had been trading down a couple dollars per share. Comcast and Netflix had feuded publicly in years’ past, but good business is just good business, we suppose.

Following the 12:15 p.m. Tuesday high, shares slid back down to earth — but Netflix still stayed in the black for the remainder of the day.

The good news was good enough to more than offset an earlier stock downgrade from analysts at Needham & Company, which impacted shares in the early going. Needham’s Laura Martin cited Brexit fears for dropping NFLX from “Buy” to “Hold.”

She later concurred with TheWrap that it was the Comcast deal bailing out Network shareholders. Of course, it wasn’t the only relevant announcement for the day. Also on Tuesday, Netflix and CW revealed details of a deal that will place all the broadcaster’s original scripted series on the streaming platform eight days after their season finales.

Below is a snapshot of NFLX’s entire trading day. The initial downgrade-based decline took place in the after-hours markets on Friday and Monday — a U.S. holiday. 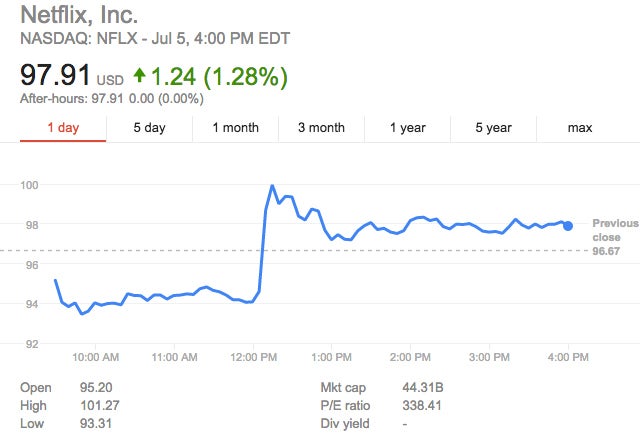