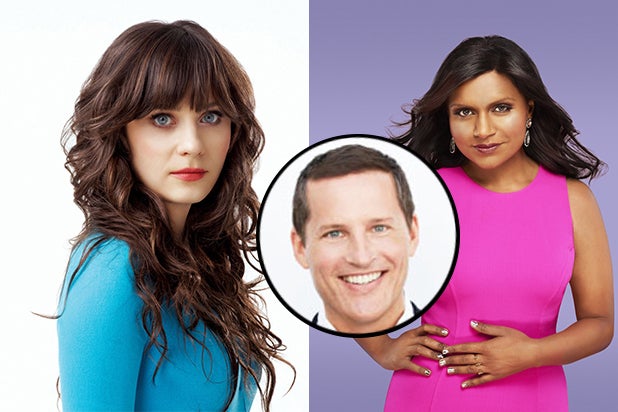 Those are glaring numbers, but Fox TV COO Joe Earley told TheWrap that internally his network isn’t necessarily considering them bad ones. As a matter of fact, the current discussion at Fox is one of pulling positive conclusions from the figures.

And you can forget the premiere-to-premiere comparison anyway, Earley told us — his research team is focused on the prior finale.

“We always look at where a show ended,” he said. “What was the last audience that the show had and are we going to be able to bring back that audience?”

In that regard, the “New Girl” season premiere pretty much hit Fox’s internal projections, Earley said.

Plus, the prior year’s season openers had an ace up their sleeve that wasn’t available this time around.

“Last fall’s premiere was the result of a pretty large marketing campaign for the whole night lineup,” Earley said. “This year had relatively no off-air [media promotion].”

That, Earley said, is because 2013 had the series debuts of “Brooklyn Nine-Nine” — which has since moved to Sundays to grab the male viewers after football — and the now-canceled “Dads” to promote. That’s not the case this year.

So episode-to-episode retention and a lack of marketing was part of the problem that caused negative headlines on Wednesday morning, in Fox’s mind.

And then there’s the fact that year-to-year, delayed viewing becomes more prominent. “We all know live plus same day no longer represents real viewing,” Earley opined.

To help prove his point, Earley called out “New Girl” specifically for having what he called a “tremendous amount” of time-shifted viewing last year, which he expects to continue. He also highlighted the Tuesday night “New Girl” gains from ratings slowpoke “Utopia,” which served as its lead-in, as well as the ultimate viewer retention by “Mindy.”

So, Earley isn’t worried about his female-centric Tuesday comedies. And perhaps, he shouldn’t be.

After all, “Mindy” has never been highly rated. But, it is a consistent critical darling.

But then there is the other one, which started hot but burned out a bit in some minds last season. That isn’t happening again, Earley insisted. “‘New Girl’ is back!” he enthused. “Everyone at the network is so excited for ‘New Girl’s’ sort of creative resurgence.”

But there may be something to worry about on Fox’s Tuesday nights. For that, our discussion turned to “Utopia,” which has had perhaps more than its fair share of struggles early in the run.

On the elaborate and expensive reality show, which has started slowly on the Nielsen sheets — even with a slight head start in the fall season — Earley promised: “We definitely are digging in.”

Dig in they will have to do. After all, Fox, which tends to start its fall season about a week before the competition, hasn’t had to contend with the heavy hitters on some nights just yet.

But, Earley is optimistic on that too. While that heavier fall competition is coming, CBS’s summer hit “Big Brother” is going — so give it a few weeks, he suggested.

“The people who love ‘Big Brother’ should love ‘Utopia,'” Earley offered. And either way, he realistically concluded, “When your glass is half full, there should be an opportunity for growth.”