The plot revolves around Elio, a kid who can’t exactly fit in, who accidentally makes first contact with an alien species. He’s beamed up to the “Commutiverse,” a “sparking space-city” that is like the intergalactic UN that is described as “outer space like no one has seen before.” Director Adrian Molina, who was the co-director of Pixar’s charming “Coco,” directs “Elio” solo. And America Ferrera stars as Elio’s mom, who works at a secret government facility that is trying to decode a message from beyond the stars.

“I am so excited to be playing Olga in this movie. She’s a character who speaks to me in so many ways,” Ferrera said. Newcomer Yonas Kibreab voices Elio, and Mary Alice Drumm will produce for Pixar.

While no footage was screened from the project, there were images of the characters and the aliens that Elio encounters. It all looks very cute and beautiful, in a perfectly Pixar-y way. (Pixar just released the space-set “Lightyear” and previously visited the starry vastness in “WALL•E.”) The story sounds sweet and charming, to match the designs, and Molina was a huge reason why “Coco” resonated so well with audiences (and continues to resonate today).

Pixar also announced an “Inside Out” sequel and the cast of its next film “Elemental” at the D23 stage. 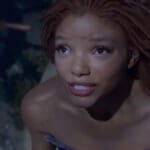