Disney released a new trailer for the “Willow” Disney+ series at D23 on Saturday, offering a closer look at the continuation of the fantasy story and revealing that Christian Slater has joined the cast.

The film is a continuation of the 1988 film directed by Ron Howard, which followed an aspiring magician (Warwick Davis) from a Nelwyn village and an infant girl destined to unite the realms, who together helped destroy an evil queen and banish the forces of darkness.

Now, in a magical world where brownies, sorcerers, trolls, and other mystical creatures flourish, the adventure continues, as an unlikely group of heroes set off on a dangerous quest to places far beyond their home, where they must face their inner demons and come together to save their world.

“I love the fantasy, the sci-fi, getting to be a part of this show was, I’ll be honest with you, an absolute dream come true,” Slater said on the D23 stage. “Getting to work with [Warwick] was great. [He’s] a legend. This whole cast I thought was great. To get to be a part of this family was very exciting. This was a very fun character, surprisingly we got to have some improv, some ad-libs, and came up with stuff on the spot which was a lot of fun. This was definitely a fun character, something I was really happy to do.” 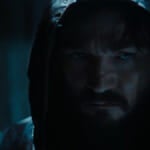