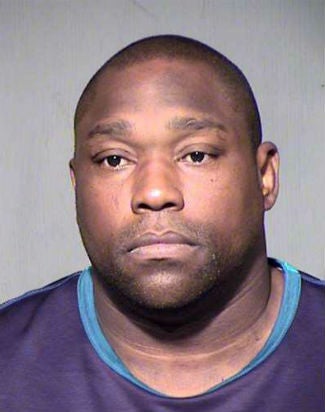 NFL Network commentator Warren Sapp has been fired after he allegedly solicited a prostitute in Phoenix, Arizona, TheWrap has learned.

“Warren Sapp’s contract has been terminated and he no longer works for NFL Network,” said network spokesman Alex Riethmiller in a statement to TheWrap.

“We were waiting for outcome of police investigation. As he has now been officially charged, we have proceeded with termination,” he added.

Sapp, 42, was in Phoenix covering Super Bowl XLIX before the arrest.

Around 2:30 a.m., Phoenix police were working security at a hotel downtown and investigating a noise disturbance. There, they were contacted by a female alleging she had been assaulted in a guest room, Phoenix Police said in a statement to TheWrap.

“She and another female were there as escorts,” the police report states. “During a meeting in the room, an argument ensued, allegedly over money and the altercation turned physical, spilling out into the hallway.”

As the investigation unfolded, police determined prostitution had occurred in a room involving one of the females. Sapp was arrested by the police and taken to headquarters.

“While there he was questioned and admitted involvement in the act of prostitution, but denied assaulting the females,” police said

In addition to Sapp’s arrest, one female was detained for one count of prostitution and a second female was later located at a Peoria hotel. The second female was interviewed and cited for violating the city’s escort permit before being released.

Since the arrest, Sapp’s bio has been taken down from the NFL Network website. He had been an analyst at NFL Network since 2008.

Last month, basketball commentator and former NBA player Greg Anthony was suspended indefinitely by CBS and Turner Sports on Saturday after he was arrested on charges of soliciting a prostitute in a Washington, D.C. hotel room, TheWrap previously reported.