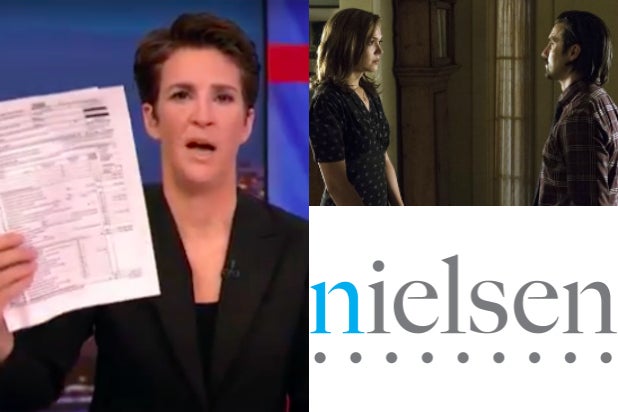 Spoilers exist: Don’t read further if you want to avoid learning details about last night’s “This Is Us” Season 1 finale.

Nielsen has just begun to recover from a weekend power outage at its Florida data-processing facility, which has delayed TV Ratings for the industry.

While numbers for every network have been affected equally, NBCUniversal channels have had some particularly big moments that haven’t yet been tallied. Ironically, their two biggest competed directly against each other.

Also Read: 'This Is Us' Season Finale: Jack's Demons Come Back to Haunt Him

On Tuesday, Rachel Maddow hyped up a huge reveal of President Trump’s tax return. As it turned out, the form 1040 was from 2005 and it didn’t even make the Commander-in-Chief look bad, leading many to assume the “Celebrity Apprentice” alum leaked them himself.

It took the MSNBC host quite a while to get down to details, an overly long setup that was mercilessly mocked on Twitter. Still, Nielsen rates a program by viewership in an average minute, which probably at least partially explains Maddow’s no-rush approach.

The host been on a hot-streak lately, but her headline-making moment may have been a record that we don’t even know about yet.

During the same 9 p.m. hour, over on broadcast, NBC aired the highly anticipated season finale for “This Is Us,” TV’s top freshman series. The still-growing drama just hit new highs last week, and last night was likely even higher.

While Jack (Milo Ventimiglia) actually didn’t die, which the show has teased and some fans expected to unfold, the lead-up and existence of social media’s immediacy made it a can’t-miss 60-minutes.

The missing Nielsen numbers have begun rolling out — we got Saturday’s this morning, for example. Sunday, Monday and Tuesday should follow in chronological order. In other words, Hollywood will get the numbers it is waiting on, but by the time they come in, intrigue levels will be lower than usual.

NBCU also scores big TV Ratings early in the week from “The Voice” and live wrestling shows USA Network’s “Monday Night Raw” and “SmackDown Live.” The squared-circle stuff is particularly buzzy this month as the road to April 2’s “WrestleMania 33” heats up.

Also adding to our assumed annoyance in and around Steve Burke’s office is that fact that NBC is the company that recently beat Nielsen into submission over its flawed Total Content Ratings. Nielsen has since delayed the rollout of that multiplatform measuring tool.

For the record, NBC declined comment for this story.

By the way, the lack of lights at its Oldsmar Data Center isn’t exactly Nielsen’s fault — blame the power company.

The incident took a skeleton weekend staff by surprise, which means the TV Ratings currency company has been recompiling everything since the regular workweek started. Such hands-on due-diligence takes time. If anyone at NBC — or any other network — is truly annoyed, imagine how the client-servicing company feels.

In any event, we anticipate Tuesday’s overnight numbers as early as later today, possibly, with fast nationals likely tomorrow. But don’t hold your breath, showrunners. And Nielsen, maybe price out a generator.