Forget it, Jake — it’s late-stage capitalism. Director Steven Soderbergh has been following the money throughout his career, going at least as far back as the “Ocean’s” movies, where financial institutions take a hit at the hands of the strivers and scrabblers. Since returning from his “retirement” from movies, he’s offered stories as disparate as “High Flying Bird,” which suggests the possibility of labor wresting control from management, and “The Laundromat,” a messy exposé of shell companies and offshore tax shelters that at least tries to gin up audience outrage over a seemingly unsolvable dilemma.

Now he’s back with “No Sudden Move,” which allows the director to revel in his love for dark comedy, criminal capers, period detail, and all-star ensembles, and while all of those elements make the film entertaining, the story ultimately feels like a hopeless recitation of doom: The rich and powerful will always be rich and powerful. The house will always win, and the police and the government and every other tool of the establishment will always crush the Have Nots if it makes another nickel for the Haves.

If a movie’s going to take us to “Chinatown,” it needs to come up with a new and different path to get there. Instead, the film revels in its genre trappings, only to grab at gravitas in the last ten minutes with the sudden introduction of historical iniquities into the story. 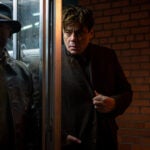 Also Read:
Don Cheadle Is a Gangster Who Will ‘Get What’s Mine’ in ‘No Sudden Move’ Trailer (Video)

To its credit, even if the screenplay by veteran writer Ed Solomon lurches into its final destination, it gets there via the scenic route. It’s a script that film schools could use to illustrate how to create exposition for an audience that’s paying attention; we get thrown into a situation with a lot of characters and backstories and agendas, and it takes the entire first viewing to get all of them (plus not one but two MacGuffins) sorted out.

Those characters include Curt (Don Cheadle) and Ronald (Benicio Del Toro), small-time hoods in 1954 Detroit who both get hired by Jones (Brendan Fraser) to “babysit” the family of auto exec Matt (David Harbour); Matt’s wife Mary (Amy Seimetz) and kids Matthew (Noah Jupe, “A Quiet Place Part II”) and Peggy (Lucy Holt) will be held hostage while Matt is taken to his office at gunpoint to retrieve some important documents.

What starts as a take on “The Desperate Hours” soon gives way to a cavalcade of betrayals and double-crosses. Curt and Ronald keep angling for leverage, but both of them have big targets on their back: Curt is in possession of a notebook that everyone in the underworld wants, particularly fearsome boss Watkins (Bill Duke), while Ronald has been having an affair with Vanessa (Julia Fox, “Uncut Gems”), who’s married to high-ranking mobster Frank (Ray Liotta). 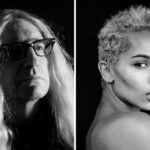 If your thought at this synopsis is, “I love this cast, and I love crime movies,” then you won’t leave “No Sudden Move” unsatisfied. Solomon’s dialogue is delectably off-kilter — Matt apologizes profusely before beating up a superior for the contents of his safe — and the performers (including Kieran Culkin as a twitchy mobster and Jon Hamm as the cop trying to straighten all of this out) tackle the material with relish.

It’s a consistently impressive ensemble, with standouts that include Fraser (intensely deadpan and clearly enjoying the “character actor” phase of his career) and Seimetz, who finds the grace notes of what could have been a stock role. Kudos also to casting director Carmen Cuba, incidentally, for pairing Seimetz and Jupe, who really do look like mother and son.

Once again pseudonymously acting as his own DP, Soderbergh uses a lot of fish-eye lenses, keeping his central characters in crisp focus while the background dwarfs them and distorts. When he’s shooting more directly, post-war Detroit — from mansions to row houses, oak-lined meeting rooms to seedy motels — is recreated with beauty and specificity by a hard-working art direction and set decoration team. (And while David Holmes’ score is stirring and exciting, it frequently paraphrases Henry Mancini’s music for “Charade.”) 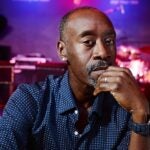 What’s most frustrating about “No Sudden Move” is its sudden pivot, in the last ten minutes or so, to trying to be About Something. What had been a film about lowlifes and their petty crimes and sordid affairs suddenly wants to be a metaphor about housing discrimination and the duplicitous conspiracies of the Big Four auto manufacturers, and it’s more than the movie can handle.

Those are absolutely historical facts worth exploring, but they play more like a tacked-on moral than as part of the story’s underbelly. Had Solomon and Soderbergh been content with “merely” making a first-class genre film, they might have made a clean getaway.