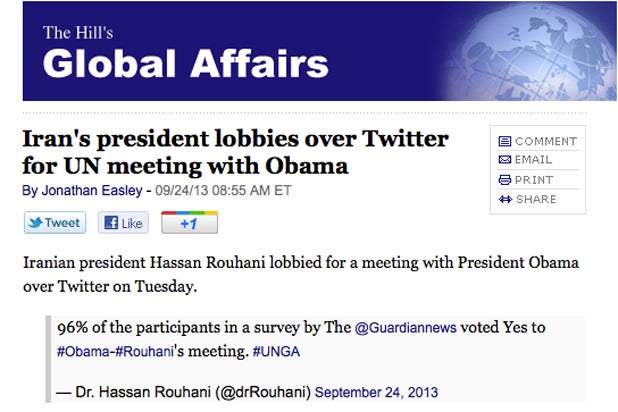 The Hill’s Jonathan Easley just learned what most (though, clearly, not enough) journalists already know: check your sources.

Easley posted a report on the political news site about Iranian president Hassan Rouhani’s desire to meet with President Obama while in the United States for the United Nations General Assembly. He cited several tweets from a Twitter account he believed was operated by Rouhani. A meeting between the presidents would be truly historic; the countries have had no diplomatic relations since 1980.

Easley wasn’t the only one to fall for the fake. Matthew Bell, a correspondent for PRI’s “The World” radio show, tweeted about the false account before asking if it was even real (especially odd since he’d re-tweeted the real account a few hours earlier).

And Reuters Digital’s outgoing executive editor Jim Roberts got them confused, but was quickly corrected by other journalists from BuzzFeed, NYT and the Washington Post and deleted his tweet.

Look before you leap, reporters. Or just wait for Ann Curry and Christiane Amanpour to interview the guy in person, so you’ll know it’s him for sure.

Update, 9:00 a.m. PT: Shortly after TheWrap pointed out his mistake, Easley updated his post. It’s now about how the fake Rouhani account is “sparking confusion.”

Easley is now exercising more caution, writing that he’s not quite sure if the @HassanRouhani account is real. “NBC News says it has confirmed the [@HassanRouhani] account’s authenticity,” Easley wrote in the update. “Although it still remains a matter of dispute.”