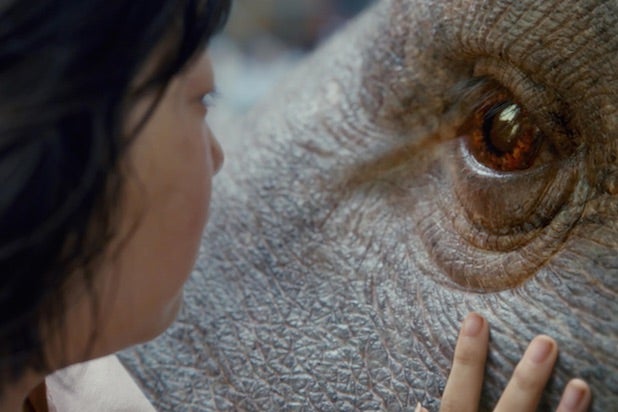 A South Korean auteur who spikes his love for genre with a wicked black humor and a fanatical attention to detail, Bong Joon Ho is one of the Cannes Film Festival directors most likely to achieve mainstream success to go with his art-house accolades.

The dual threat led to a packed house at the early-morning Cannes screening of his new film, “Okja” — which, once it got past a rough stretch as the Netflix logo was booed and then technical problems halted the screening, gave the festival a much needed shot of energy, audacity and sheer weirdness.

It also supplied Cannes 2017 with something that had been badly missing in its first two days of programming: good fun.

Part kid flick, part slapstick adventure comedy, part animal-rights diatribe, it is as playful, uncontainable and messy as its main character, a giant pig who is by turns charming, unruly and touching.

Bong’s last film, “Snowpiercer,” was a genre exercise spun sideways, an action movie with a social conscience set on an endlessly speeding train. It was wry and fatalistic and absolutely thrilling, “Speed” meets “The Lord of the Flies” meets “Brave New World.”

“Okja” has similarities, mostly in the alternative-future setting (though the titles insist this quietly dystopian world is the present) and the presence of a made-over Tilda Swinton delightfully pulling out all the stops as a very bad person (or two).

If it doesn’t always seem sure of what kind of movie it wants to be, “Okja” is at its heart a love story, albeit one between a little girl and a giant, genetically engineered piglike creature named Okja.

Okja has been created by the Mirando Corporation, a multinational behemoth with a history of evil dealings that its new CEO, Mirando family scion Lucy Mirando, is trying to obscure by putting on a happy face. (Comparisons to Ivanka Trump, Swinton told TheWrap, are unplanned but not unfair.)

For years, the big pig has been the best friend of young Mija, played by An Seo Hyun. But when when Okja is shipped to the USA for unknown but likely nefarious purposes that go deeper than the PR stunt Lucy Mirando is promising, Mija heads out in pursuit. She’s aided by the comically well-meaning Animal Liberation Front, who stage raids only after telling their victims that they’re nonviolent, and who fight using what they insist (in mid-combat) are nonlethal choke holds.

The members of ALF include a delightfully earnest Paul Dano — but their comic escapades, and even Swinton’s delicious scenery-chewing, are overshadowed by Jake Gyllenhaal’s insane performance as Dr. Johnny Wilcox, the host of an animal show with declining ratings. In short-shorts and bad hair, he plays Dr. Johnny as part Crocodile Hunter, part Richard Simmons (in his prime) — he’s way over the top, which is exactly where the famously exacting Bong wants him to be.

“Okja” is a kids’ story that ends in a slaughterhouse, a comedy that gets very serious. It’s messy and alive, frustrating and fun in a way that few other films at this festival will likely be.

And by the way: Once the technical problems were fixed, it looked great on a big screen. It may have taken Netflix to get this thing made, but theaters are where it belongs.