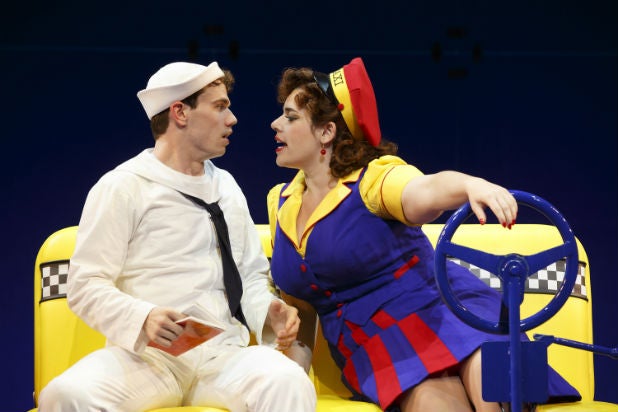 From “Urinetown” to “On the Town,” director John Rando has finally returned to Broadway with another big hit. There’s a nice symmetry to the bookends of those two Gotham “town” tuners, the Leonard Bernstein revival having opened Thursday at the Lyric Theatre.

Rando brings a whimsical irreverence to everything he directs, often with a healthy dollop of vulgarity, and for “On the Town” he doesn’t stint on emphasizing the randiness of the New York City streets during World War II. And that’s just the broads, as they say in the Navy! In comparison, the show’s three sailors act almost demur. That peculiar imbalance, however, gives this 1944 musical just the contempo edge it needs to enliven Betty Comden and Adolph Green’s vintage book about the sailors’ hunt for Miss Turnstiles. As these three young men in white bellbottoms learn, New York City is different, and that goes double for its women.

Also different is starting a musical with “The Star Spangled Banner” and having the whole audience rise to sing along in front of a huge American flag. To paraphrase one of Bernstein’s hit songs, something’s coming, something good and different.

This is war time, and while the sailors only have 24 hours to play in the big city, the women there have been trapped and sex starved for literally years. Sex starved is the only way to describe Alysha Umphress’s zaftig Hildy when she puts the make on Jay Armstrong Johnson’s sailor Chip, forcing him to do backflips and spin on his head in her cab before she gets him to her apartment. The word “nympho,” retro as it is, sums up Elizabeth Stanley’s fiancée Claire in her forward approach to Clyde Alves’s sailor Ozzie in the apartment of her rich fiancé Pitkin, played by Michael Rupert with studied detachment. Even the male civilians are cowed by the voracious females around him.

For a little variety, there’s the quiet Miss Turnstiles (a.k.a. Ivy), who, in comparison, is the good girl in the bunch despite being a hoochie coochie dancer on Coney Island. Silent waters not only run deep here, they dance very well. Actually, this Miss Turnstiles is New York City Ballet principal dancer Megan Fairchild in her Broadway debut. Her pas de deux with Tony Yazbeck (the third sailor, Gabey) make the raw, silly sex of the other couples recede, and their utterly infectious, youthful abandon and yearning take center stage. Tomorrow he may die, but today they’re going to live it up.

“On the Town” began as Jerome Robbins’s ballet “Fancy Free,” about three sailors on leave. The current credits read that the show is “based on an idea by Jerome Robbins” and that he choreographed the original 1944 production (the legendary George Abbott directed.) Those ballets and dances are in good hands with Joshua Bergasse in his Broadway debut as choreographer. Either Bergasse is absolutely inspired or he has the good taste to borrow from the very best. It’s probably some of both.

Beowulf Boritt’s set and projection designs are sparse yet expansive; they tantalize with the visual suggestion that the vast stage is always about to be filled with dancers, great dancers. The 1,800-seat Lyric Theatre is never kind to comedy; its cavernous space eats up the laughter, but Rando brings the action downstage and into the auditorium as often as possible, and as soon as the chorus breaks into dance the theater bursts with contagious energy. The new Lyric Theatre, something of a white elephant, works for the first time in its short history on 42nd Street.

Also read: ‘The Curious Incident of the Dog in the Night-Time’ Theater Review: Now on Broadway, Soon to Be a Movie

Whenever Comden and Green’s book begins to sag, there’s another great ballet, not to mention Bernstein’s music, just waiting around the corner. Those aforementioned credits also read “additional material by Robert Cary and Jonathan Tolins,” which, I’m guessing, is some of the sex stuff and also a few bits of manic business  involving Jackie Hoffman, who pops up as Maude P. Dilly, Diana Dream, Dolores Dolores, and other delightful cartoons. No one, except maybe Julie Halston (now in “Can’t Take It With You”), can goose up a show like Hoffman. Some intrepid producer should put these two gifted comics in a revival of “Legends!” and let them slug it out.

The two previous Broadway revivals of “On the Town” played for fewer than 100 performances each. Third time is the charm.