Earlier this year Jason Statham reteamed with his longtime collaborator Guy Ritchie for “Wrath of Man,” a surprisingly satisfying revenge thriller. Clearly, getting the band back together suited them, because they have returned for another new movie, “Operation Fortune: Ruse de guerre,” which is due out early next year from STX Films. And the explosive first trailer just dropped in all of its oversized glory, which you can view in the player above. 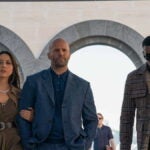 “Operation Fortune: Ruse de guerre,” based on an original screenplay by Ivan Atkinson, Marn Davies, and Ritchie, follows a superspy named Orson Fortune (Statham), who is trying to stop slippery billionaire Greg Simmonds (Hugh Grant, who recently starred in Ritchie’s “The Gentlemen”) from unleashing a deadly new technology onto the world stage. In order to accomplish this mission, he recruits a famous movie star who Simmonds is obsessed with (Josh Hartnett, another new member of the Ritchie troupe after “Wrath of Man”). The tone seems to be slightly goofier than the fully hardboiled “Wrath of Man,” harkening back to Ritchie’s earlier movies that more effortlessly mixed extreme violence with extreme comedy. And it’s cool to see expanded cast of Guy Ritchie players return for one big, car-chase-filled adventure. Also Statham’s character is named Orson Fortune. That cannot be overstated.

Rounding out the cast are newcomers Aubrey Plaza, Bugzy Malone, Cary Elwes (who will also be featured in the upcoming seventh “Mission: Impossible” film) and Lourdes Faberes.