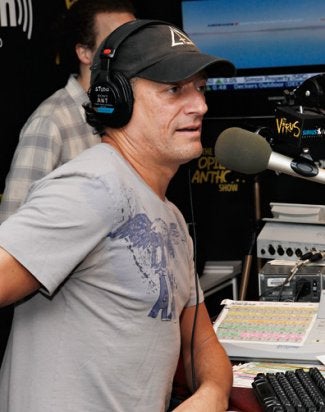 Anthony Cumia, co-host of SiriusXM’s “Opie and Anthony,” was taking photos in Times Square on Tuesday when he was allegedly assaulted by an African-American woman who didn’t want her picture taken. He then went on a tirade on Twitter, writing a slew of offensive and racists posts about the incident.

According to Cumia, the woman was in the frame of one of his shots, and upon discovering this, immediately assaulted him, punching him in the face. He proceed to call her an “animal bitch” and a “savage,” referring to her as “it,” and stating that “they aren’t people.” He described the race situation in America as a “battle,” adding that “we are losing.”

“It’s really open season on white people in this day and age,” he wrote. “No recourse. Fight back and you’re a racist. The predators know this. Good luck”

In another post, Cumia wrote, “There’s a deep seeded problem with violence in the black community. Try to address it and you’ll be exiled to racistville. But it’s real.” He added, “The switch to violence is immediate. No discussion, just violence. When will THAT be addressed? Oh, right, never. Slavery did it? Oh, ok.” He then went on to write that he hopes his alleged assailant gets shot and killed.

Cumia retweeted and commented on posts from other people, adding fuel to his vitriol. One user tried to suggest that the problem was women in general, and not black people. To this, Cumia wrote, “No, it’s not. I’ve never been hit repeatedly by a strange white woman on the street. Don’t lie.”

In another post he insisted that he didn’t bother trying to sue the alleged assailant, because “It doesn’t work. White guy/ Black ‘girl!’ We’re doomed!”

When asked if he notified law enforcement, Cumia wrote, “Please! It’s a non issue to LE. After the 10th punch a dropped N bombs on her. That’s it” The typos are his, so the meaning of this statement isn’t entirely clear.

Representatives for Anthony Cumia and SiriusXM did not immediately respond to TheWrap’s requests for comment.